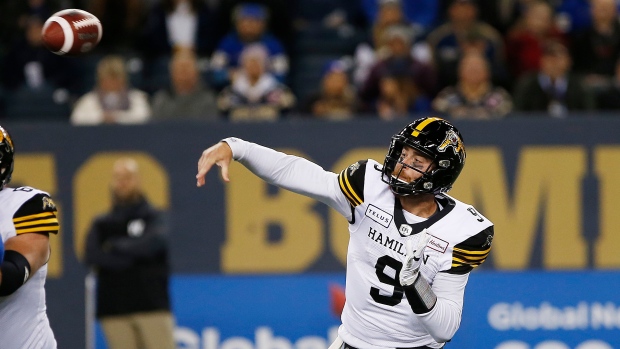 Evans then went out and threw for 359 yards and three touchdowns as the Tiger-Cats (11-3) remained the league's best after a 33-13 victory over the Blue Bombers.

The two former backups-turned-starters talked to each other while both were on the field practising holding during the pre-game warmup.

“He's a great dude,” Evans said of Streveler. “I love his competitive spirit. I'm pretty competitive myself. We just talked a little bit.”

The loss ended Winnipeg's six-game unbeaten streak at home this season, which was a run of nine straight victories at IG Field going back to the end of last season.

The Bombers (9-5) were first in the West Division heading into the game with an identical record as Calgary, which they beat earlier this year.

Hamilton and Winnipeg are considered Grey Cup contenders, and both are led quarterbacks who got their starting jobs due to season-ending injuries.

Evans made his eighth start in place of Jeremiah Masoli, who tore his anterior cruciate ligament in a late July win over Winnipeg.

Would he have any advice for Streveler about officially grabbing the reins?

“The only advice I'd tell him is just to be himself,” said Evans, who's in his second season with the Ticats. “Don't worry about nothing else, just play your game.

“He's a natural leader. The guys on the team will gravitate around him and he's going to be fine.”

Evans has been doing pretty well since taking over from Masoli. He's 6-2.

Friday's victory was the fourth straight game he's thrown for more than 300 yards. He completed 25-of-32 pass attempts with one interception.

The sophomore Streveler was 31-of-42 for 304 yards with one touchdown and two interceptions. Winnipeg has lost three of its past four games.

“They pretty much did what we expected them to do,” said Streveler, who's 2-3 as the starter. “They just played better than us today. Critical mistakes at critical times.”

Hamilton's Bralon Addison, the league's hottest receiver since Week 10, had an eight-yard TD reception, his seventh of the season. Brandon Banks hung on for a 10-yard TD catch at the back of the end zone.

Ticats backup quarterback David Watford dove for a one-yard TD and Lirim Hajrullahu booted field goals from nine and 47 yards out. He made three converts and one hit an upright.

Veteran running back Tyrell Sutton made his debut with Hamilton after signing with the club Sept. 9 and caught an eight-yard TD pass. He ran eight times for 25 yards.

Running back Andrew Harris had an eight-yard touchdown catch for Winnipeg. Kicker Justin Medlock connected on field goals from 42 and 47 yards and went wide on a 41-yard attempt. He was good on one convert.

Hamilton opened the contest going two and out and Winnipeg responded with Harris's TD at 7:36 to cap off an 11-play, 73-yard scoring driving.

The Tiger-Cats followed up with points on their next three possessions from Addison's TD, Hajrullahu's nine-yarder and Banks' TD that he helped set up with a 40-yard gain by weaving through defenders.

“We just never really got anymore traction after that first drive,” Harris said.

Evans soon aired out a 52-yard pass to receiver Marcus Tucker, who got to Winnipeg's one-yard line. Watford plunged over the goal line on his second attempt for the 24-7 lead with 56 seconds remaining in the first half.

Medlock made two straight field goals to squeeze the visitors' lead to 24-13 at 2:45 of the third quarter. Hajrullahu added a 47-yarder at 9:49.

The teams exchanged quick interceptions and the Ticats used theirs for Sutton's TD at 4:06 of the fourth. Hajrullahu's convert hit the upright.

This report by The Canadian Press was first published Sept. 27, 2019.