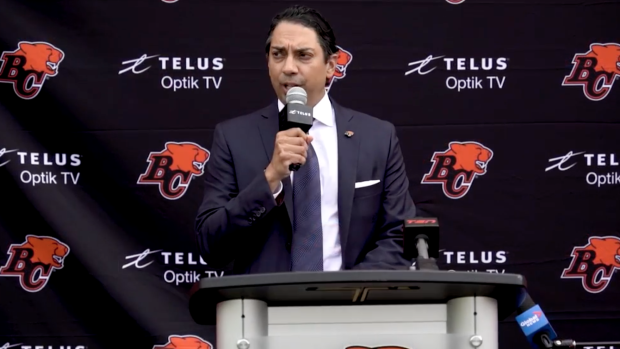 Wednesday was a good day for the Canadian Football League, maybe the best one in a very long time.

There is a new owner for the B.C. Lions; someone local, well-financed and capable of resurrecting a once-proud franchise that has lost some of its relevance in the important Vancouver market.

There’s no guarantee that 51-year-old entrepreneur Amar Doman will be a great CFL owner. But on the surface, this was about as big a win as one could expect, especially given all the uncertainty surrounding the league over the past 18 months.

If the Victoria native’s business resume is any reflection of the expertise he brings, it’s hard not to see the Lions new ownership as anything but a vote of confidence to a league that could sure use it right about now.

In a nine-team league, every market matters. But this ownership change happens at an especially important time – not just for the league but the Vancouver market as well.

The city has blown hot and cold for the CFL over the past 30 years, enjoying some very good times but, more recently, some very lean ones.

Former owner David Braley rightly deserves praise for rescuing the Lions from bankruptcy at the end of 1996, and subsequently hiring the late Bob Ackles to run the franchise, capitalizing on his deep roots in both the local business and football communities to return the team to prominence in the early 2000s.

The chapter of Braley’s ownership that followed Ackles’ death in 2008 was far less impressive.

Though the team got a boost from the renovation of BC Place, which reopened with a retractable roof in 2011, the Lions mostly slid backwards under Braley before his death in October of 2020.

While his commitment ensured the bills were always paid on time, Braley was never a visionary. In fact, he was an owner who was far more old-school than new-age, someone who would rail behind the scenes about the league preventing him from blacking out games on television so he could boost attendance.

By the end of his tenure, the Lions had become a perennial money loser, failing to draw 20,000 for their home opener in 2019 despite having repatriated quarterback Michael Reilly, the league’s biggest name, in free agency.

They fell behind Major League Soccer’s Whitecaps in terms of attendance, while struggling to stay relevant to the city’s general sports fans, particularly younger ones.

That’s not a Vancouver-specific problem for the CFL but the market appeared to be trending more in the direction of Toronto than the league’s healthier Western Canadian markets.

Part of the struggle in Vancouver has been the Lion’s inability to cultivate fans within the large minority communities of southern B.C. Like in most places, the CFL fan base in Vancouver looks more like Canada of 50 years ago than a reflection of the country today.

How will having an owner of South Asian heritage affect the Lions’ ability to break into those communities and cultivate a fan base among younger, non-white audiences?

It’s an impossible question to answer but an important one, and something that will only reveal itself with time.

Coming out of the extended downtime caused by the pandemic, the CFL has faced a myriad of serious challenges to its long-term future – serious enough that the league explored a merger with the XFL in the spring.

That ship may have sailed (for now), and there remain important issues for the league to face at the end of this season, including ensuring that ownership in the money-losing markets of Toronto and Montreal remain committed for the long term.

But Doman’s introduction Wednesday means one of the league’s biggest question marks is no more.