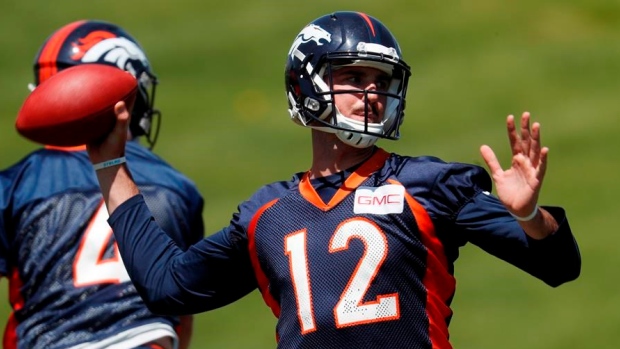 There was a certain deer-in-the-headlights look to Paxton Lynch when the former first-round pick of the NFL’s Denver Broncos stood at the podium on Monday, meeting the CFL media for the very first time as a member of the Saskatchewan Roughriders.

It was certainly understandable for a guy who didn’t realize there were going to be 12 players on each side of the ball until his first meeting with Riders offensive co-ordinator Jason Maas last week.

Being a rookie for a second time is an altogether different experience for Lynch, who was selected 26th overall by Denver out of the University of Memphis in 2016, less than three months after the Broncos had ridden the end of Peyton Manning’s career to a Super Bowl win over Carolina.

Lynch was the third of 15 quarterbacks taken that spring, with Denver trading up to make him the first one taken after Jared Goff and Carson Wentz went first and second overall, respectively. One hundred and nine picks later, the Dallas Cowboys selected Dak Prescott.

The apparent heir to Manning in Denver, Lynch was paid a rookie signing bonus in excess of $5 million – more than the combined salaries of all the players on his new team this season.

But somewhere along the way, the Broncos decided he couldn’t be salvaged.

Lynch played sparingly in his rookie 2016 season behind seventh-round draft pick Trevor Siemian, but it wasn’t until 2017 that things really started to go awry.

By the spring of 2018, Denver had signed NFL journeyman Case Keenum to a two-year, $36 million contract, demoting Lynch to backup. Eventually Lynch ended up with third-string duties behind Chad Kelly, whom the Broncos had taken with the very last pick of the 2017 draft.

It didn’t matter that he’d battled injuries or that he had three offensive co-ordinators in two seasons when Denver released him before the start of the 2018 season after just four career starts.

That fall he worked out for Detroit, Philadelphia, Washington, Jacksonville, Seattle, Tampa Bay, Tennessee, Miami, and Green Bay, with no takers. Seattle signed him in January of 2019, then cut him in late August. He was then picked up by Pittsburgh, which kept him for nearly a year before cutting him in September of 2020.

All of which paved his way to Canada.

It’s rare that quarterbacks selected in the first round of the NFL Draft come to the CFL, but there have been enough of them over the past 50 years to study their body of work.

(* Rosenbach was not a first-round pick but was projected to be so had he declared for the 1989 draft on time. Instead, he was selected in that year’s supplemental draft.)

The collective work of these players is hardly impressive. Three of them –Marinovich, Young and Freeman – never threw a CFL pass.

So why did these once highly prized players fail to cut it in the CFL?

The NFL quarterback is among the most highly scouted and scrutinized positions in all of professional sports. Those judged to have the makeup to justify a first-round pick and the accompanying investment are rare.

So, when a team cuts bait with one of those players so early in his career, there’s usually a solid reason – and often not just one. Those reasons don’t disappear at the border.

Then consider the path quarterbacks must take to achieve success in the CFL. It takes most of them two to three years of practice and study before they are truly ready to excel at the Canadian game. There are very few exceptions.

A raw college star who barely got a sniff at the NFL is usually willing to put in that kind of time to succeed in the CFL, even though it’s not the league he grew up dreaming about.

But how many former first-round picks are going to be willing to do that?

Former first-round picks come to the CFL to get back to the NFL as quickly as possible, a fact Lynch by no means denied this week.

He can’t do that riding the bench. But if Lynch makes the Roughriders, he’ll be backing up Cody Fajardo, the CFL’s leading passer in 2019 and the West Division nominee for Most Outstanding Player. And a player who – not coincidentally – was a backup for three full seasons before he ever got a chance to become a starter.

Will Lynch be willing to do what Fajardo did in the CFL before finding his opportunity and success in Saskatchewan? Probably not. It’s just the way a former NFL first-round pick is going to be wired.

Lynch is 27, by no means old for a quarterback, but the clock in his head is undoubtedly ticking.

He says he’s not motivated to try and prove anyone wrong by coming here, but he’ll have to do just that to accomplish his goal of a return to the NFL.

Maybe Lynch will be the exception, the guy who can figure it out here and reverse the minds of NFL decision makers.

But history tells us that Lynch is likely to experience more than his share of humility and challenges on the road ahead.