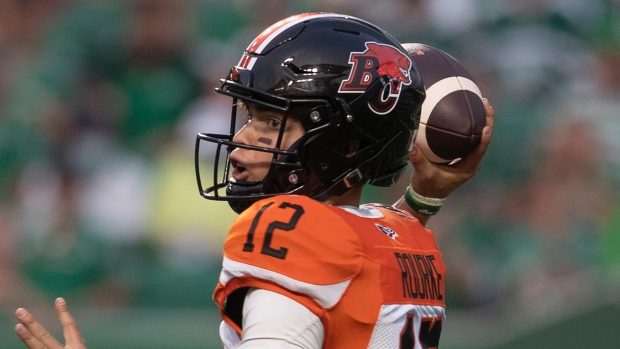 Growing-up in Oakville, Ont., Nathan Rourke is familiar with the dynamics and excitement that go with a Canadian quarterback playing in the CFL.

But even he’s been a bit taken aback by the attention he’s received by being the first Canadian quarterback to start a Week 1 game in 38 years.

“I guess I was always aware of it but I certainly did not expect the way it’s come at me this entire week, people making a big deal of it,” Rourke said with a chuckle. “I didn’t expect it to be that much because I really haven’t done anything. There’s so much more to show and to prove...”

Rourke, who was good on 10 of 18 passes for 194 yards, two touchdowns and two interceptions in sharing time with Michael Reilly will get his second start in Calgary tonight, with Reilly still ailing.

It’s an unusual opportunity for such a young player but Rourke arrived in the CFL with a resume unlike many Canadian quarterbacks. He was a three-year starter at the University of Ohio, leading his team to three successive bowl victories, while being considered among the best NCAA Mid-American conference quarterbacks since Ben Roethlisberger.

Canadians who have played quarterback at an NCAA Division I school are rare, with a definite advantage in comparison to those trying to make the leap to the CFL from the U-Sports level in Canada.

The most recent Canadian to start a game prior to Rourke, Brandon Bridge, starred also in the NCAA at South Alabama before playing in the CFL from 2015 to 2019.

That said, Calgary’s Michael O’Connor, who redshirted for one season at Penn State before transferring to a successful career at the University of British Colombia, won the No. 2 with the Stamps this summer behind Bo Levi Mitchell.

Rourke, meanwhile, was able to win the No. 2 job in B.C. by beating out, among others, Shea Patterson, who started at Ole Miss and Michigan, and was an NFL Combine invitee in 2020 when Rourke was not. All of which flies in the face of a still widespread belief that Canadians at the position don’t get a fair shot in comparison to Americans.

“They certainly ask a lot more mentally from the quarterback and they don’t ask me to run the ball at all,” Rourke said. “At this point in my career, I feel like I can still run it. I certainly would love to run it a little more but they’re asking the quarterback to be good with his feet know when he’s (under pressure) and be able to get out on time, drive the ball down field and get through progressions.”

“Those are things I was asked to do at Ohio but just not in the volume that I am here and that’s good. I’ve had to learn and that’s the biggest transition to the pro game.”

So what would it mean to the CFL if Rourke and/or O’Connor evolve into legitimate starting quarterbacks?

There has long been a belief among CFL fans and stakeholders that a successful Canadian starting quarterback would be a panacea for the league, something to take it to new heights.

But evidence suggests that general sports fans in Canada don’t make entertainment choices based on nationalism.

For example, the many Canadian players who’ve played for the Toronto Blue Jays don’t appear more popular because of their birth certificates. And the same could be said of players such as Toronto Raptor Chis Boucher, a Montreal native who has evolved into a key contributor for the NBA team.

It’s more likely that a Canadian quarterback will be a rallying point for the existing CFL fan base, than a breakthrough to broader audiences.

But it’s still great to see.

Tongues were wagging across the CFL and within the sports betting community last Friday night after the Lions made a kickoff-time decision to start Rourke over Reilly.

Reilly had been listed as “questionable” on the Lions injury report the previous day and had been limited in practice all week. Still, the messaging from the club was that he intended to start, with both the TV broadcast and the in-stadium announcer believing such.

All of this on the opening week of a season in which the league has been impressing on the teams the importance of transparency to appeal to the sports betting industry. And asking them not to engage in the traditional CFL gamesmanship in which teams would often use misinformation to disguise who was playing and who was not.

So when Rourke took the field instead of Reilly, to a lot of people it looked like the “same old CFL,” especially those who held tickets betting on the Lions plus-6.

One was the Lions rallying back in the second half to pull to within 4 points, thus cashing bets for everyone who held tickets for the Lions plus-6 points. In other words, everyone in a position to be upset by the quarterback switch got paid. Which tends to keep people quiet.
The other was the Lions explanation that Reilly pulled himself from his start when his elbow didn’t respond to treatment, which is more plausible than the Lions dressing an injured quarterback just as a decoy. This season the CFL has reduced the number of quarterbacks on the active roster from three to two, meaning that any team wishing to dress an injured quarterback as a decoy starter has to run the risk of playing a game with one quarterback.

That’s not a risk-reward equation that makes any sense.

Reilly started and played most of the second half, before he was pulled again in favour of Rourke.

The league followed-up on the situation and this week put-out the following statement.

“CFL and the Lions have discussed the importance of accurate depth charts and injury reporting. The league agrees that the Reilly situation was unique but has underlined the need for transparency.”

So give the Lions the benefit of the doubt and thank the betting Gods that all those Lions plus-6 tickets cashed.

There was considerable speculation about what the early weeks of this CFL season would look like after 20 months off and so much turnover on many of the league’s teams, not to mention four teams with new head coaches and no preseason.

Aesthetically, the football was passable but not great, with only one pure offensive stinker, Ottawa’s 16-12 win over Edmonton.

But overall, all the games were close and underdogs winning three of the four games added a bit of intrigue for this season.

The biggest improvement goes to the Toronto Argonauts, who have already equalled one quarter of their win totals for each of the two most recent seasons. The Argos weren’t just bad in 2018 and 2019, they had a way of getting behind early both in games and in the standings.

The Argos’ last two seasons began at 0-6 and 1-5 and the team was consistently blown-out by halftime. So staying close against the Stamps, trailing 14-11 at the half and emerging with a win at Calgary is a huge first step.

Here’s a look at how scoring and passing compares from Week 1 of this season compare to 2018 and 2019.

It’s too small a sample size to draw many conclusions. However, the early indications are about what we’d expect, with defences outpacing offence compared to the opening week of the past two seasons.

In a league in which a number of starting quarterbacks have been nursing injuries to start the season, it was nice to see Winnipeg’s Zach Collaros scrambling like it was 2014.

Collaros extended his win streak as Winnipeg’s starter to five games with an opening-night performance against Hamilton that was reminiscent of the way he used to play when he was at his peak in black-and-gold prior to tearing his ACL in 2015.

Against Hamilton, Collaros ran three times for 23 yards but more importantly bought time with his legs, throwing on the run while remaining mostly elusive to the Hamilton defence.

“He’s got a certain skill set that allows him to feel pressure in the pocket and he’s got great escapability,” said Winnipeg head coach Mike O’Shea. “I do like how he takes care of the football and his playmaking ability allows him to not stand in the pocket and force throws. He’s going to create space for him and his teammates.”

It was hard to know what to expect from Collaros when the Blue Bombers traded for him in October of 2019, when he hadn’t played since suffering a Week 1 concussion.

The payoff won them a Grey Cup and has given them a starting quarterback who has thrown just one interception in 127 attempts as a Blue Bomber.

When the 2020 CFL season was still in limbo, James Wilder Jr. decided it was time to move on from football.

He announced his retirement, started a training academy near his home in Florida and was coaching high school ball. All of which reminded him how much he missed playing the game.

So when friends Trevor Harris and Shawn Lemon (now with Calgary) started lobbying him to return to the CFL with Edmonton, he couldn’t say no.

“Just being away from the game, to be real with you, I shed a few tears,” Wilder said of Saturday night’s season-opener against Ottawa. “I was just grateful to be out here. I miss this, this is what I wanted to be a part of. I missed football a lot. A lot more than I thought I would. I haven’t taken a day for granted.”

Wilder was a revelation to the Toronto Argonauts when he became the team’s starting running back partway through the 2017 season, earning the league’s honour as top rookie helping lead Toronto to an unlikely Grey Cup win.

Unfortunately, he couldn’t repeat that kind of performance in either of the next two seasons in double-blue.

Against Ottawa, Wilder had 89 yards rushing and 72 yards receiving for 161 total yards, touching the ball 24 times, a number that warmed his soul.

“I freakin’ love it,” Wilder said. “I’m not going to lie. When coach (Elizondo) started the season like that I said `now coach you can’t tease me like this and go down … I know I’m a bigger back, he same size as the linebackers or bigger and I don’t shy away from contact. So as I’m getting my runs in I’m wearing down the defences.”

“I feel like it helps the overall offence but I love those touches. I thrive on it. I feel like I get stronger as I go. The fans cheering after every big play, I missed all of that.”

Montreal defensive tackle Almondo Sewell had some strong comments about the quarterback of his former team, Edmonton’s Trevor Harris, whom he will face on Saturday.

“You hit him one time, he starts folding,” Sewell said. “Let’s see if he’s the old Trevor.”

That’s a cutting comment directed at any quarterback, especially one who is a former teammate.

The Elks may not be happy about what Sewell said but the CFL is surely just fine with it. In recent years at off-season league meetings, the league has encouraged its teams to let its players share opinions in the media about their opposition, knowing that such comments can generate storylines, controversy and most importantly, interest.

There’s a reason boxes and MMA fighters engage in this kind of thing all the time.

The CFL would be happy if more players followed suit.