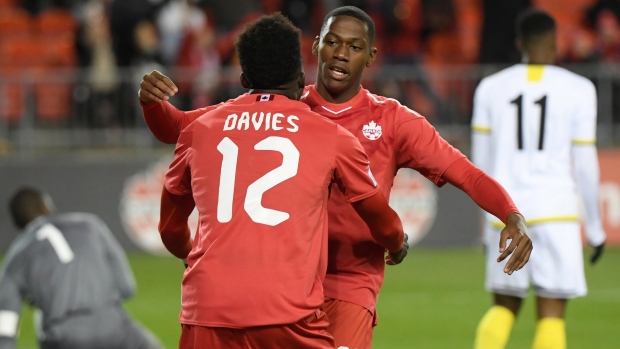 It’s exactly two hours after Bianca Andreescu’s US Open win in New York City and two more teenage Canadian stars are standing next to each other.

Jonathan David and Alphonso Davies are inside the tunnel at BMO Field.

In less than a minute they will walk out on to the field together, nine players ahead of them, and stand together as a team in red getting ready to sing O Canada.

At this exact time they are here because they are told to be according to Concacaf protocol, but it shouldn’t be lost on anyone in this sport that their journey from the heights of European football to playing for Canada in Toronto is all because of their will.

The last few hours, much like most of the past week since arriving in Canada, have been calculated meticulously using the measurement of time, so they know where and when to travel, train, eat and sleep.

Davies and David track much of this by using their phones, the same ones that put smiles on their faces weeks earlier when calls from coach John Herdman confirmed they were once again part of Canada’s plans for the upcoming Nations League Group A games.

Time has moved quickly for these two teenagers. As their reputations soar internationally, they have become significant pillars for Herdman and his staff to build around.

Life does not always move rapidly though. It’s 8:09 p.m. and the duo are lined up as part of a fearsome front three for Canada  waiting for the referee to blow the whistle to start the game. Despite their age, you can feel their growing presence in this camp and the pair has learned to embrace their time with teammates as a true opportunity to learn and improve. Throughout it all, though, for these placid young men few things raise the heartbeat like the start of a match for Canada.

Unleashed on to the field and the stage where they feel the most comfortable, David and Davies are now exactly that – a duo operating together on a grass field under lights on a Saturday night in Toronto. They are young enough to be just a couple of teenagers looking for a kick about, but they are far too talented now to not be asked exactly where to be and why.

“I’m always excited to come back and play for this great nation and it’s a call I will always answer,” Davies told TSN recently.

The Bayern Munich winger is considered Canada’s best player by many, but he has struggled to show that regularly on the field in 2019 after an inconsistent Gold Cup where he was asked to play left back as well as left wing.

That story continues to develop in Toronto. At 8:34 p.m. he dashes into Cuba’s penalty area, ready to connect on the end of an outstanding cross from right back debutant Richie Laryea. Davies has done everything right when no one else was watching, timing the run and using his intelligence to know where to be when the ball arrives. At the moment everyone’s attention falls to him, he calmly side foots the ball towards goal but sees his effort denied by a comfortable save. The 18-year-old raises his hands to his face in disbelief and frustration.

His time to shine will come, but at the moment it’s David’s time and no other teenager is getting in the way of that.

Fresh off a Golden Boot award as the top scorer at the Gold Cup and more goals for his Belgian club side Gent, David is no longer operating in his comfort zone. Shy, reserved and quiet, he doesn’t seek attention. But a remarkable 2019 has changed his life forever and now he is a man opponents will talk about as much as Davies.

Five minutes before Davies was denied, midfielder Mark-Anthony Kaye, himself having an exceptional night, played a ball over the top of the Cuba defence towards David.

It’s the cue for the forward to get into attack mode 40 yards from goal. Timing is everything for David’s game, and having held his run to stay onside he now sees the ball floating towards him. Like a race car testing their revs parked in the pits, David allows himself a brief sprint at top speed before understanding he has to wait for his accomplice and the ball is slowing down quicker than he anticipated. At this point he trusts his technique and uses the outside of his right boot to flick the ball forward and ahead of him. It’s a remarkable touch, showing love to a ball that will repay him 5.8 seconds later. While waiting for the ball he allows a defender to come across his path, but his next touch embarrasses his opponent, scooping it forward into the vast open land that he dreams of playing in.

David is now on a path towards goal – a journey where no road is exactly the same and where many strikers have travelled and failed to deliver in a one-on-one showdown with the goalkeeper. It’s a mentality test on an avenue full of success and failure that often separates the great from the good. David embraces it and shows his intelligence by using his left foot to kick the ball further away from goal and, crucially, another defender approaching him from behind his left shoulder. At this stage he decides the intruder can run across his route as he caresses the ball waits for him to slide by before carefully slotting it through the goalkeeper’s legs.

Statistics tell the story of a record eighth goal for Canada in one year, but the real story was seen in less than six seconds, with a Canadian scoring the type of goal that raises reputations and enhances expectations.

David’s time is now and his rise has him on the radar of many top European clubs. Like Davies, he is a modern footballer with versatility, able to play in all three forward positions in Canada’s 4-3-3 where he can be unleashed into open spaces with his terrific pace.

Davies remains more complicated. He would play for an hour as a left winger and 30 minutes as a left back in Toronto but wasn’t anywhere near his best, his most notable moment coming as a left back when he could combine and explode into an open space and win a penalty.

With enormous tests coming up against the U.S., it wouldn’t have been a stretch to say his place in the side could have been questioned based on that performance. Clearly in need of more playing time, he was better in the away game against Cuba where he would score the game’s only goal, a ferocious strike into the top corner. It was a moment in time that sums up his game at this stage, a piece of brilliance on instinct, and although he played far better in the second game than in Toronto, he’s clearly still a gem that needs nurturing.

In David and Davies, Canada have two difference-makers who have arrived at the same time. They can do things on a football field that few Canadians have ever done before. While other team sports struggle to get top Canadians to represent their countries in international tournaments, this country has a pair of teenage stars who have a real opportunity to soar together.