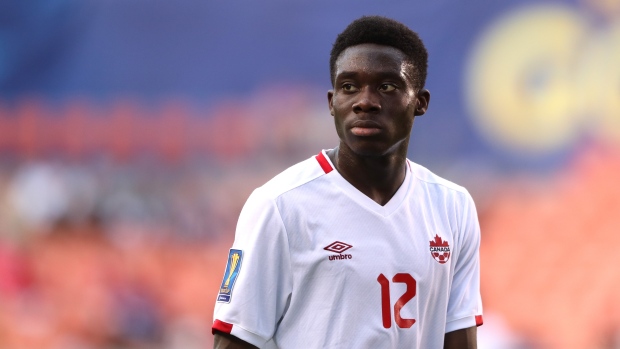 The 18-year-old suffered the minor setback during Sunday's Bundesliga game against Mainz.

Canada coach John Herdman said Davies "felt something" while celebrating his first goal for Bayern Munich in that game.

Davies, an attacking midfielder with nine caps for Canada, joined Bayern from the Vancouver Whitecaps in a then-MLS-record US$22-million transfer. The deal was consummated in July but Davies closed out the MLS season before joining Bayern in January.

Canada is ranked 79th in the world while French Guiana is unranked since it is not a member of FIFA.

At stake Sunday is a place in the top tier of the CONCACAF Nations League and a berth in the 2019 Gold Cup.

Canada stands third in the 34-team standings with a goals difference of plus-14. Curacao (plus-21) tops the table ahead of Haiti (plus-16). Cuba (plus-14, but has played two home games to Canada's one) is fourth, followed by Jamaica (plus-11) and Martinique (plus-6),

French Guiana (2-1-0) stands 12th. The four-game qualifying round sets the stage for a three-tier competition, complete with promotion and relegation, that kicks off in the fall of 2019 in the confederation covering North and Central America and the Caribbean.

The top six teams out of qualifying will join Mexico, Costa Rica, Panama, Honduras, the U.S., and Trinidad and Tobago in the top-tier CONCACAF Nations League A. Those six countries skipped qualifying by virtue of reaching the final round of CONCACAF World Cup qualifying.

Those six will also join the top 10 teams from Nations League qualifying at the 2019 CONCACAF Gold Cup, which increases to 16 teams from 12. That will motivate French Guiana, which has made the regional championship just once.

Canada defeated French Guiana 4-2 in their only previous meeting, at the 2017 Gold Cup. A 16-year-old Davies scored his first two international goals in the win.