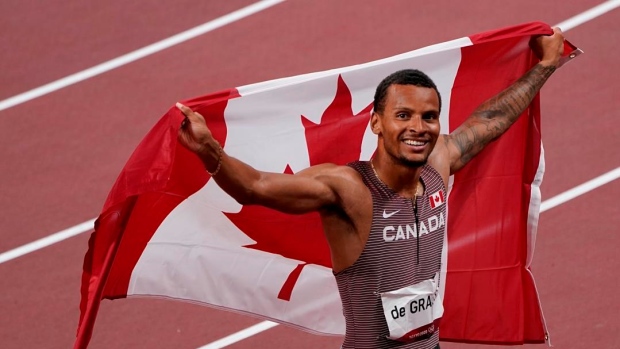 Andre De Grasse and his mother couldn't stop smiling at each other during a call after the sprinter won his first Olympic gold medal in Tokyo on Wednesday.

"I finally did it, mom," Beverly De Grasse recalled her son saying after he won the men's 200 metre final. "He was just so excited, so happy."

The 26-year-old track star from Markham, Ont., won the race with a Canadian-record time of 19.62 seconds.

His mother, who wasn't able to be in Tokyo due to pandemic restrictions, said she hasn't been able to calm down from the excitement brought on by the race.

"I feel like I'm on a high and I don't know how to come down," she said, smiling at reporters in Pickering, Ont. "Even though I was expecting it, it was just still so surreal."

Andre De Grasse's victory came 25 years and one week after Donovan Bailey raced to 100-metre gold at the 1996 Atlanta Olympics.

Beverly De Grasse said her son had wanted to win gold in 2016 during the 2016 Rio Olympic Games and was finally able to achieve his dream.

"I had no doubt in my mind that he would pull away from them because he has that endurance and that speed to really make it to the end," she said.

Andre De Grasse captured a bronze medal in the 100 metres on Monday in Tokyo, and picked up a silver and two bronze at Rio. He raced to a silver and three bronze in the 2015 and 2019 world championships.

His mother said her son's family and children have kept him grounded. He and his partner, Nia Ali, are raising three kids.

"He's not just doing it for himself, he's doing this for his family, his kids, so that they could look up to him and be a role model to them," his mother said.

De Grasse's youth coach also expressed deep pride over his student's gold-medal win and hoped it would inspire young Canadians to pick up track and field.

"He's a true example of what can be attained with dedication and commitment," said Tony Sharpe, calling De Grasse "the ultimate role model."

Sharpe recruited De Grasse to his club, Speed Academy in Pickering, late in his high school years and said it's been exciting to watch his progress.

"I'm extremely proud," he said in an interview. "To achieve this in basically seven or eight years of international competition, it bodes well for his future and probably the future of sprinting."

De Grasse started in the sport "a little bit late," Sharpe said, but his success has been "incredible."

"I've been in the sport for 50 years. He's the most talented sprinter I've ever observed," said Sharpe, who won a bronze medal at the 1984 Olympic Games in the 4x100 metre relay.

The coach said he would like to see De Grasse's victory encourage athletes to give track and field a try, a sport he said only gets a high profile during the Olympics once every four years.

"Hopefully it will inspire a lot of younger Canadians to take up the sport," he said.

— with files from Elena De Luigi