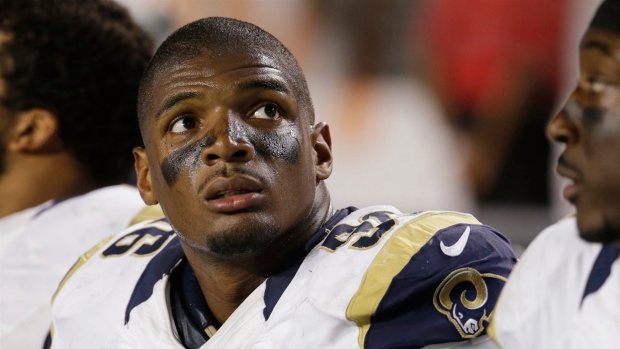 TEMPE, Ariz. -- The strain and sweat on their faces showed just how much one more chance in the NFL means to Michael Sam and 104 others.

Except for pro days for college players entering the draft, March isn't usually a time for running sprints and drills before scouts. Then again, these "veterans" will take any opportunity to prove their worth.

"Whoever wants me," Michael Sam said Sunday when asked about returning to the field for the initial NFL veterans combine. The first openly gay player drafted didn't make it with the Rams last year, cut at the end of training camp. He landed on the Cowboys' practice squad for a few weeks, then was released.

"If the Rams or Cowboys want me, I'm on the first flight out," he said.

Unlike many of the others on hand, including a variety of former first-round draft picks such as Brady Quinn, Felix Jones, Jamaal Anderson and Adam Carriker, Sam really has a blank NFL resume. But he's certain he'll get a shot at a roster spot -- and not the "Dancing With The Stars" variety.

"Absolutely, I think my chances are high," the 25-year-old defensive end said. "As long as I have that will to play the game and I am healthy, you'll continue to see me trying to play in this league. I am very confident I will be playing football somewhere."

Sam didn't rule out Canada, either: "If that's the opportunity, I'll take it. I'm a fighter and I'm going to keep fighting."

Sam's disclosure that he is gay brought a wave of attention to the NFL from those outside sports. The Rams were applauded for selecting him, albeit eight spots from the end of the proceedings.

That he didn't make the roster, the team said, was purely a football decision, and Sam was trying to break in on one of the league's top pass-rushing units.

Dallas signed him for the practice squad days later, but released him in October. Sam has been out of football since. What he wants is another look.

Many of the players in Tempe have played extensively in the league and were among more than 1,800 applicants for this combine. Whether they were released or, quite often, injured, they couldn't -- or wouldn't -- come to grips with their NFL careers being over.

Carriker, for example, missed the last two seasons because of a torn quadriceps and then a setback in his recovery. The Rams' first-rounder in 2007 (13th overall), he played two seasons in St. Louis before being traded to Washington. He spent his last four seasons with the Redskins but has not been in a game since 2012.

During recent workouts, Carriker said he was outrunning defensive backs, which gave him a huge boost toward a comeback. Several teams contacted his agent and said they'd watch him work Sunday.

The defensive end even volunteered to lift weights, something not on this combine's agenda.

"Out of sight, out of mind. That's why this is great for me," he said. "To show I am still alive and here and want another chance.

"If it's possible my passion for the game is probably stronger. When you have to watch something you love and have been doing all your life, it's difficult."

Jones echoed those thoughts. The Cowboys' first-rounder in 2008 (22nd overall) spent five seasons in Dallas, leading the NFL with a 5.9-yard rushing average in his second season. But he rarely was the team's first consideration as a rusher. After spending 2013 with Pittsburgh, Jones was out of football last year.

The 27-year-old Jones showed some burst at the combine, and hoped it was noticed.

"Every veteran wants another opportunity to showcase what he can do," he said. "I can bring speed, quickness and excitement. I'm a special teams player, I can catch the ball out of the backfield, I can even play in the slot if they want me to do it. Whatever it takes."

These veterans -- at least the ones who have had a true taste of the NFL -- understand just how much it takes to remain there. It's even tougher to get back there.

"Yeah, this shows people I am still around," said 30-year-old running back Michael Bush, a six-year vet who last played in the league with Chicago in 2013. "Put me in pads. I always get the job done."