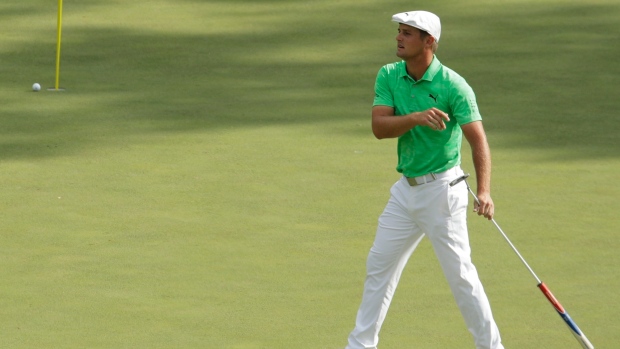 AUGUSTA, Ga. — Bryson DeChambeau believes science was at work late in the afternoon at Augusta National, creating a force in the atmosphere where big roars from great shots filter through the back nine.

An easier description: Another exciting finish at the Masters, this time on a Thursday.

Brooks Koepka got it started, adding to his reputation of playing his best golf in the majors. He rolled in a 20-foot putt birdie from behind the 12th green, the first of four straight birdies to take the lead. DeChambeau answered with four straight birdies at the end of his round, with two shots inches away from being even better.

His 8-iron on the par-3 16th grazed the edge of the cup. His 6-iron into the 18th was even better, so good that it rolled smack into the middle of the pin and bounced back an inch or two .

"Absolutely, there is an energy and there is something in science that does talk about that," said DeChambeau, who has a scientific answer for everything. "It's great to have momentum and great atmosphere and gets you all pumped up, creates adrenaline flow. ... I believe that's partially what happened today."

They were one shot ahead of 48-year-old Phil Mickelson, who delivered thrills of his own.

Mickelson found some momentum after shots in the pine trees at No. 10 and in the water on No. 11, both leading to bogey when he thought it could have been worse. He answered with three birdies on the next four holes, including a shot into the 16th that stopped inches from the cup .

"It looked like, after bogeying 10 and 11, that would kill some momentum. It was the other way around, because I made two great bogeys that should have and could have been doubles," Mickelson said. "And then when I got to the holes that I could birdie, I took advantage of it with some good shots."

Tiger Woods missed all the action. He played earlier in the round and methodically scored a solid 70. It was a good start for Woods in his quest to end 11 years without a major, and he was atop the leaderboard briefly until a late bogey. He sounded satisfied.

"I've shot this number and won four coats, so hopefully, I can do it again," said Woods, who slightly miscalculated. The last green jacket he won in 2005 began with a 74. The goal was to not fall too far behind early, and he is just four shots behind.

Rory McIlroy's bid for the last leg of the career Grand Slam began with a 73, which featured six bogeys.

"I made five birdies — that wasn't the problem," McIlroy said. "I just made too many mistakes."

Even more surprising to McIlroy was no one from the early starters took advantage of soft turf from recent rains.

"It's there for the taking, and I'm surprised someone hasn't run off," McIlroy said.

And that's right about when Koepka and DeChambeau took off.

"Honestly, I was hitting it great all day," DeChambeau said. "Just an accumulation of great golf that finally showed in the score."

He two-putted for birdie on the par-5 15th. He narrowly missed his first hole-in-one in competition. From the woods right of the 17th fairway, he went just over the back of the green and chipped in from 35 feet.

He didn't see until later how good his shot was into the 18th because he was in light rough short of the fairway bunker, unable to see the green but knowing it was good from the roar of the crowd.

"Oh my gosh," DeChambeau said when he watched the replay for the first time. "I guess I should have pulled the flagstick."

He is not the only player to putt with the flagstick in the cup — allowed under the new Rules of Golf — just the only one to apply science to the decision .

Koepka played in the last group of the day, and didn't have great energy in his group. Jordan Spieth had to rely on his short game to salvage a 75, matching his highest score at Augusta. Paul Casey, coming off a victory three weeks ago in Florida, failed to make a birdie in his round of 81.

Blinders on, Koepka played bogey-free in his first time at the Masters in two years. He missed last year recovering from a wrist injury that left him wondering if he would ever play again. Then he won a second straight U.S. Open, held off Woods to win the PGA Championship and has established himself as a major player.

"I think just an understanding of how to play and handle the bigger tournaments, and understanding how to deal with pressure a little bit better," Koepka said of his recent run of three majors in his last six tries.

He holed out from behind the green at No. 12 , picked up birdies on the par 5s and rolled in a bending 20-footer in between on the 14th.

Dustin Johnson and Ian Poulter were at 68, while Jon Rahm and Adam Scott were among those at 69.

Justin Rose, who returned to No. 1 in the world and was among the favourites this week because of his recent history at the Masters, opened with a 75.

"It's just a great test of golf to start out the first round of Masters," DeChambeau said. "And to be honest, it's great to sift through some of the really good players and maybe not so great players in this event right now. And look, it's not to say they are bad players. It's just very difficult out there and every aspect of your game has to be on point."