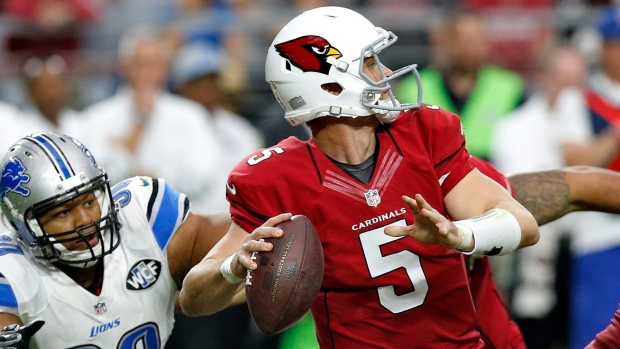 Drew Stanton was good enough, Arizona's defence was excellent and the Cardinals beat the Detroit Lions 14-6 on Sunday to improve to an NFL-best 9-1.

Stanton threw touchdown passes to Michael Floyd on Arizona's first two possessions and the Cardinals held the Lions without a touchdown, the first time that's happened to Detroit since 2009, in a matchup of teams with two of the best records in the league.

"When you score six points, you're not going to win a lot of ball games," Lions quarterback Matthew Stafford said.

Detroit got inside the Arizona 20-yard line only once, and that was after one of Stanton's two interceptions. The loss snapped a four-game winning streak for Detroit (7-3).

Stanton, starting after Carson Palmer was lost for the season with a knee injury, threw TD passes of 42 and 12 yards. After that, Arizona's offence stalled and Stanton threw two interceptions. But the Lions couldn't convert either turnover into a touchdown.

"It was a great win for us," Cardinals coach Bruce Arians said, "and solidifies the belief in our locker room that whoever steps in steps up."

Arizona won its sixth in a row and has its best record through 10 games since 1948. The Cardinals, 6-0 at home, also have a three-game lead over Seattle and San Francisco in the NFC West.

Arizona held an opponent without a TD for the first time this season.

Stanton, whose wife delivered the couple's second child on Monday, sent Palmer a text right before the game.

"'I'm stepping in for him," Stanton said, "but this is still his team."

Neither team scored in the second half in a matchup of two of the game's best defences.

Detroit's only real threat came late in the first half.

Cassius Vaughn intercepted Stanton's pass and got the ball at the 19. Detroit advanced it to the 10 and Lions coach Jim Caldwell challenged the spot, arguing that it should have been a first down. But the spot stood and Caldwell decided to go four a field goal on fourth-and-1.

"That was huge, huge," Arians said. "After that interception, to hold them to three I thought set the tempo for the rest of the football game."

Calvin Johnson, usually defended by Patrick Peterson, had five catches for 59 yards for the Lions, only one for 4 yards in the first half.

As usual, Arizona blitzed away and put its faith in its talented secondary.

"We put it on them every week," Arians said. "That's the strength of our football team, and we play to their strengths."

The reversal of an officials' call early in the fourth quarter played a big role in the game.

Arizona's Justin Bethel got to a punt by the Cardinals at Detroit's 1-yard line. Bethel tossed the ball away from the end zone, and after it hit another Cardinal or two, Detroit's Jeremy Ross picked it up and ran 49 yards to the Arizona 45. Arians challenged the play, arguing that Bethel had possession of the ball at the 1 and did not bat it back. After a review, Arians won the challenge and the Lions had to start from the 1.

"They said (Bethel) possessed the ball, and that's the ruling," Detroit coach Jim Caldwell said. "It doesn't matter what I think."

A 12-yard pass from Stanton to Larry Fitzgerald on third-and-11 in the final minutes sealed the victory.

The Cardinals took the opening kick and went 80 yards in six plays. The next time they got the ball, they went 77 yards in seven plays.

After Matt Prater's 50-yard field goal hit the left upright and bounced through to make it 14-3, the Cardinals mounted another long drive. But on first down from the Lions 14, Stanton's pass was intercepted by Josh Bynes.

NOTES: The Lions had come from behind in the fourth quarter to win their previous three games. ... The Cardinals have intercepted 15 passes. ... Arizona plays next Sunday at Seattle, where the Cardinals won last year. ... The Cardinals play four of their last six on the road. ... Detroit is at New England next week.