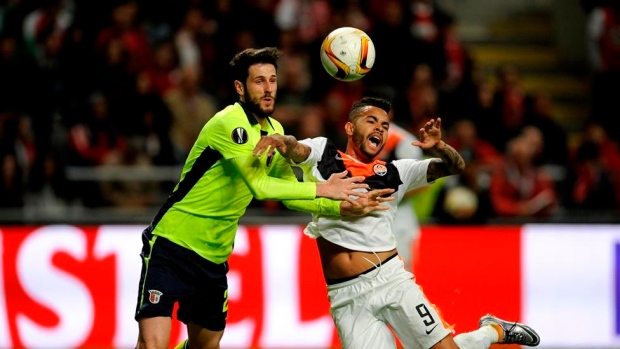 Ricardo Ferreira, a Canadian-born defender who won one cap for Portugal, has switched his international allegiance to Canada.

The 28-year-old, born in Mississauga, Ont., to Portuguese parents, was with SC Farense in the Portuguese top tier most recently but became a free agent last month.

After spending time at the Toronto FC academy, he left Canada at 15 to join FC Porto's youth ranks. His club resume also includes time in the AC Milan system.

"It's been quite a journey. A long one, lots of ups and downs," Ferreira said in an interview.

The right-footed centre back said John Herdman has been in contact with him since taking over the Canada's men's team in January 2018.

"I felt like it was finally time to make the decision and I'm just extremely excited to be part of the national team squad," he said. "I'm ready to go. I'm ready to take part."

FIFA has approved Ferreira's switch, given his lone appearance for Portugal at the senior level was not in a competitive game. Ferreira played in a November 2017 friendly against the U.S.

Herdman spoke of the long courtship that allowed Canada to land Ferreira with TSN's Luke Wileman.

"We’ve been chasing Ricardo for a few years now – a lot of phone calls, a lot of Zoom meetings," Herdman told Wileman in an interview that will air on Monday. "Pretty much before every camp, I would have a connect-in with him to see where his mind was at. But he’s at a stage in his career where I think he’s clear. He has that clarity where he can help Canada on our journey. He has had some injuries in the last couple of years and he’s coming back from those, so we’re all hoping he gets a good run of games, but you know, that quality, if anybody has seen Ricardo play, could really be supporting the team that we’ve got."

Herdman describes Ferreira as a "modern centre back" who has played at a good level in Europe. He has been on the Canadian radar for some time -- then-national coach Octavio Zambrano talked him up in 2017.

He grew up playing for Dixie SC and Brampton YSC, won the Canada Soccer U-14 Cup with Brampton Blast in 2006 and also played for Ontario’s youth select teams.

After Porto, he played for AC Milan's under-19 team, with loan spells at Italy's Empoli and Portugal's SC Olhanense and FC Pacos de Ferreira.

He found a home in Portugal at SC Braga in 2015, winning the Portugal Cup and reaching the quarterfinal stage of the Europa League in 2015-16.

His time at Braga was interrupted by two knee injuries, however. He had surgery to repair a torn anterior cruciate ligament in his right knee, only to re-injure the knee in his first game back.

"It was about a two-year interruption … It's perfectly fine (now). I'm 100 per cent," added Ferreira, who still has family in the Toronto area.

When his Braga contract expired, he moved to Belenenses SAD in 2019 before joining newly promoted Farense last September. He did not see first-team action with Farense, which currently stands 17th in the 18-team league at 3-9-4.

"I can't say it was a great experience but that's football," he said. "Sometimes things don't go the way we want it to or the way we plan it. It's a closed chapter and I'm just looking to move on and to find another club where I can showcase my talent and help the team."

Herdman believes Ferreira's background and history can be an asset to those around him on Canada.

"He's experienced," Herdman told Wileman. "I mean, he’s a 28-year-old who's been at AC Milan, won a domestic cup with Braga, played in European cup competitions – played for Portugal. That’s the sort of experience you want to put around the Alphonso Davies, et cetera."

After losing the likes of Canadian-eligible players Owen Hargreaves (England), Teal Bunbury (U.S.), Jonathan de Guzman (the Netherlands) and Asmir Begovic (Bosnia and Herzegovina) to other countries in the past, Canada has a good record of retaining and securing talent in recent years.

"There's definitely an optimism around the group," Herdman said of his team. "It's a very talented group. We've, I think, created a culture that is professional, it has a high-performance foundation and these players can see that.

"And they can see that the team is primed to go somewhere and they want to be part of it."

Herdman's recent camp in Florida featured defender Frank Sturing, a former Dutch youth international. Theo Corbeanu, who represented Romania at the youth level but has switched allegiance to Canada, was also slated to be there but ended up staying with England's Wolves.

Toronto FC striker Ayo Akinola, who was born in Detroit but moved to Canada when he was one, missed out through injury.

He made his debut for the U.S. senior side in December, scoring in a 6-0 win over El Salvador, but is not cap-tied because the match was a friendly. Canadian officials had hoped to show off their program at the Florida camp.

Marcelo Flores, a 17-year-old Mexican youth international forward in the Arsenal youth ranks, was also supposed to attend the camp but stayed in England.

The Canadian men are scheduled to face Aruba, Bermuda, the Cayman Islands and Suriname in the first round of CONCACAF World Cup qualifying in March and June. The Canadian men also have the CONCACAF Gold Cup in July.

"Fingers crossed he be back playing and active before that March camp and available for selection.

- with files from TSN.ca