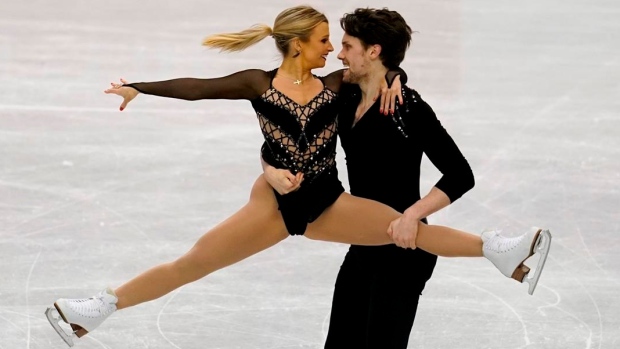 The Canadians skated to Rihanna's "Love on the Brain", hitting a triple twist, throw triple loop and side-by-side triple toe. The ISU Grand Prix Finalists collected a level four for the lift and the side-by-side spin for a personal-best score of 76.36 points.

''There are definitely a few elements we can execute better,'' said Moore-Towers, from St. Catharines, Ont. ''But we achieved our goal to deliver a better performance than at nationals (last month).''

China's Cheng Peng and Yang Jin were second at 75.96 while two-time world champions Wenjing Sui and Cong Han were third at 73.17.

“We’re definitely happy with the overall performance,” said Marinaro, from Sarnia, Ont. “We left a few levels out there so we’re going to have to clean up those levels for the world championships and get those extra one, two points to push that score as close to 80 as we can.”

Evelyn Walsh of London, Ont., and Trennt Michaud of Trenton, Ont., were sixth and Lubov Ilyushechkina of Toronto and Charlie Bilodeau of Trois-Pistoles, Que., were eighth.

''We had to fight for some things but we are happy with how it went,'' said Michaud. ''We worked well together and used each other's energy.''

In ice dancing, Piper Gilles and Paul Poirier of Toronto are in third place after the rhythm dance with a season-best score of 83.92. Madison Hubbell and Zachary Donohue lead at 85.95 and fellow Americans Madison Chock and Evan Bates are second at 85.76.

Gilles and Poirier completed level-four twizzles and a level-four rotational lift in their upbeat program to "Mack and Mabel."

''We're just very pleased that this program has been constantly improving over the course of the season,'' said Poirier. ''We need to go out in the free dance and skate to the best of our abilities. Our free dance has been really successful for us this year.''

World junior champions Marjorie Lajoie of Boucherville, Que., and Zachary Lagha of St-Hubert, Que., were fifth and Carolane Soucisse of Chateauguay, Que., and Shane Firus of North Vancouver were sixth.

''Right now we're just focusing on the performance and the rest will come,'' said Lagha. ''We were really in the moment today. It was good.''

Rika Kihira of Japan leads the women's competition after the short program.

Skating to “Breakfast in Baghdad,” Kihira opened with a flawless triple axel and added a triple flip-triple toeloop combination with a triple lutz for 81.81 points and a comfortable lead over American Bradie Tennell, who was second with 75.93.

“The triple axel was very good,” Kihira said. “I thought I could have had a little more speed on the combination jump but overall I'm very satisfied.”

Tennell opened her routine with a triple lutz-triple toeloop combination and also landed a double axel and a triple flip to finish ahead of local favourite Young You, who scored 73.55.

Alicia Pineault of Varennes, Que., was 10th, Emily Bausback of Vancouver was 14th and Alison Schumacher of Tecumseh, Ont., was 18th.

''It was close to my season's best in terms of points,'' said Pineault. ''I was disappointed I wasn't able to do the triple-triple because it has been consistent all season.''

This report by The Canadian Press was first published Feb. 6, 2020. With files from The Associated Press.