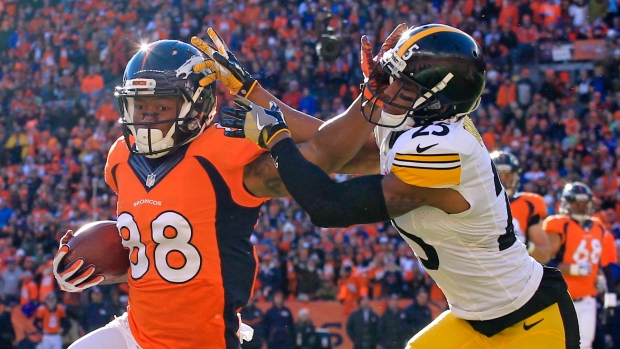 Demaryius Thomas is hanging up his cleats.

The five-time Pro Bowl wide receiver announced his retirement on Monday as a member of the Denver Broncos, with whom he won Super Bowl 50.

"It was a tough decision, a real tough decision," Thomas told team's website. "… Always as a kid or always when I did something, it was always [giving] my best to go and go and go. And football was my go. Every year I tried to get better and better, and I knew I was aging, of course. It was something tough, but I'm grateful I did 10, 11 years. I'm so grateful for that and now I can move on. I'm happy, I'm healthy. And now I can try to find my next itch."

A first-round pick in 2010 out of Georgia Tech, Thomas appeared in 143 games over 10 season with the Broncos, Houston Texans and Jets.

His greatest success came with the Broncos.

A native of Montrose, GA, Thomas made five consecutive Pro Bowls from 2012 to 2016, five seasons in which he posted 1,000 or more receiving yards. In 2014, he led the NFL in receptions with 111 and receiving yards with 1,619. The previous season, Thomas led the league in touchdowns with 13.

"Demaryius had an incredible NFL career and was such a big part of everything we accomplished during his many years as a Bronco," Broncos president John Elway said. "D.T. was the complete package as a wide receiver, growing into one of the very best at his position. The combination of his size, speed, strength and athleticism was unmatched. Demaryius' remarkable consistency and production were instrumental in our offense setting historic records and our team winning a lot of games, including two AFC Championships and Super Bowl 50."

Thomas says he moves in his life with no regrets.

"No regrets at all," Thomas said. "There's no reason to. I'm here, I'm blessed. … I tried to do what I could do every play — if it was catch a ball, if it was to block somebody. I tried to put my everything in it every time."