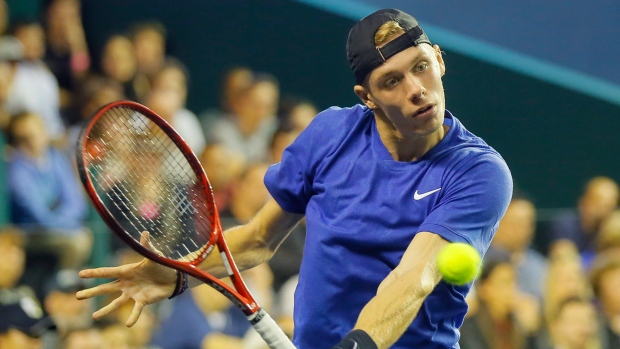 Shapovalov was dominant in his latest victory over a top opponent, building on early breaks in both sets and not letting 13th-seed Monfils get into the match.

In a match that lasted just 59 minutes, Shapovalov had 22 winners to just seven for Monfils. Shapovalov had five aces, including one on his first match point, and converted four of five break points.

"Honestly, I think from the first ball I was trying to be aggressive, just dictate to him, and everything was kind of working for me today," said Shapovalov. "Any shot I was going for, I was trying to make, it was landing for me. So it was one of those days where I couldn't ask much more for me."

A mercurial player who went through a significant mid-season slump, Shapovalov looked at his best against Monfils, punishing the veteran with hard and accurate forehand shots.

The 20-year-old from Richmond Hill, Ont., currently ranked 28th in the world, posted his third straight win over a top-15 opponent. He also defeated 11th-seed Fabio Fognini in the second round and stunned world No. 6 Alexander Zverev in the round of 16.

The win ensures Shapovalov will finish the season with a top-20 ranking on the ATP Tour. It also ended Monfils' hopes of reaching the season-ending ATP Finals in London and sending U.S. Open semifinalist Matteo Berrettini there instead.

The Spaniard would finish the year as No. 1 if he wins the Paris Masters for the first time.

"It's going to be a tough match," said Shapovalov. "He's been having an amazing week, and he's been playing some really good tennis. So hopefully we can have an exciting match."

Shortly after the match ATP announced that Shapovalov was withdrawing from the Next Gen Finals — a year-ending tournament featuring eight players aged 21 and under that starts Tuesday — due to fatigue and would be replaced by Spain's Alejandro Davidovich Fokina.

Djokovic, who lost to the Greek player three weeks ago in the Shanghai quarterfinals, did not concede a break point. It could have been an even quicker victory considering he led the first set 5-0, 40-0, but Tsitsipas saved three set points and held serve.

The 16-time Grand Slam champion, who is chasing a 77th career title, even impressed himself.

"I played one of the best matches of the season. I prepared myself very well for this match. I lost to Stefanos in Shanghai and obviously I went through the videos, understanding what I did well, what I didn't do so well," Djokovic said. "I served well. I read his serve very well, as well. Put him under pressure constantly."

The four-time champion broke Tsitsipas in the third game of the second set, then held and broke to love for 4-1. Tsitsipas, who dropped his serve four times, appeared to hurt his left ankle when retrieving a shot near the baseline in the second set.

Serving for the match, Djokovic clinched it on his first match point when Tsitsipas whipped a forehand long following a short rally.

Djokovic, last year's runner-up, is bidding for the year-ending No. 1 ranking. He next plays U.S. Open semifinalist Grigor Dimitrov, and leads the unseeded Bulgarian 8-1 in their career meetings with the only defeat coming on outdoor clay six years ago.

Dimitrov, who beat 20-time Grand Slam champion Roger Federer in the U.S. Open quarterfinals, is widely viewed in tennis as a player of largely unfulfilled promise.

He has won only eight career titles, and none since winning the ATP Finals in 2017 for his biggest prize.

Still, despite his overwhelming winning record against him, Djokovic remains wary of a Dimitrov in full flow.

"He has been one of the best talents we had in the sport in the last decade for sure. There's been a lot of comparison with his game and Federer's game," Djokovic said. "Since the U.S. Open he's playing at a different level, a high level. He always had the game; it's just sometimes it's a matter of things coming together, really, mentally and at the right time."

Djokovic points out that Dimitrov, who is set to break back into the top 20 ranking places next week after plummeting to No. 78 in August, has found a way to overcome a weakness on backhand that once stood out.

"The backhand was always his kind of weaker shot ... so most of the players (tried) to attack that vulnerable side of his game," Djokovic said. "But he mixes it up really well with the slice. He blocks a lot of returns and gets back into play and he moves extremely well. He's one of the fittest guys on the tour. So that helps him, always being in the right position."