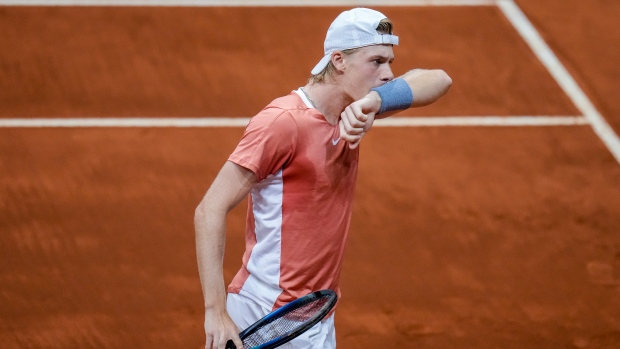 MADRID — Canada's Denis Shapovalov was eliminated from the Madrid Open on Tuesday after a 6-1, 3-6, 6-2 loss to former No. 1 Andy Murray in second-round action.

Shapovalov put himself in an early hole as he struggled with his command in a wild first set. He won just 48 per cent of his service points and managed to win just seven out of 25 points on return.

Murray broke Shapovalov twice on three chances in the opening set, and the Scotsman defended the only break point he faced.

Murray, a two-time Madrid Open champion, had the chance to take control of the second set at 2-2 with a chance for a break. But he was unable to convert, and Shapovalov roared back to force a deciding set.

Shapovalov, seeded 14th in Madrid, couldn't build on his second-set success, and Murray put the game away with his fourth break of the match.

Eighth-seed Felix Auger-Aliassime of Montreal, who opens his tournament Wednesday against Chile's Cristian Garin, is the last Canadian remaining in singles competition.

Bianca Andreescu, the last Canadian left on the women's side, lost 7-6, 6-1 to American Jessica Pegula in a third-round match earlier Tuesday.

This report by The Canadian Press was first published May 3, 2022.