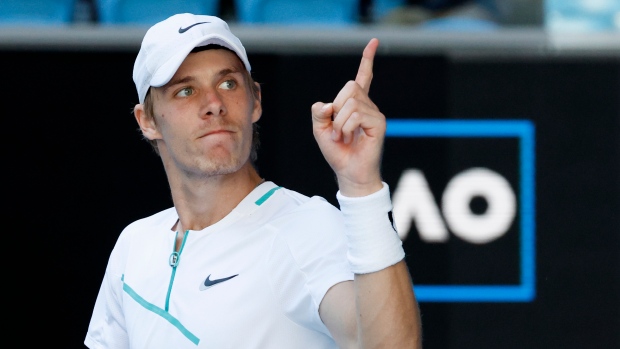 Denis Shapovalov needed three hours and 23 minutes to take down Serbia’s Laslo Djere in the first round of the Australian Open on Monday, working through a handful of unforced errors and a fourth-set tiebreak.

It was a cakewalk compared to his second-round matchup.

The Richmond Hill, Ont., native went the distance with Kwon Soon-woo, needing five sets and nearly four and a half hours to dispatch of the 54th-ranked South Korean. Shapovalov lost back-to-back tiebreaks in the second and third sets but battled back to take the final two and avoid an early exit.

“It was tough to bounce back every time. In the second set I had a set point on his serve and then the third set I had a couple of set points. I felt I was doing everything the right way, it just wasn’t going my way,” Shapovalov told TSN’s Mark Roe after the win.

“It’s definitely not easy but it’s the case sometimes. I’m just happy to be alive and have an opportunity to play in the third round. I’m pretty young so I’m sure I’ll be alright; I’ve had this before.”

Now it’s on to the third round for Shapovalov where he gets his toughest test of the tournament yet in No. 23 seed American Reilly Opelka.

Opelka has had a much easier road to Round 3, scoring straight-sets victories over Kevin Anderson in the first round and Dominik Koepfer in the second. Standing at 6-foot-11, the big-serving American isn’t much for rallies, combining for 41 aces in his first two matches in Melbourne.

“I think it’s more about recovery to be honest. I mean, Reilly’s game is pretty straightforward. He goes for his serves, he’s going for his ground strokes off the back as well so it’s going to be kind of like a guessing game a little bit on the returns and hopefully, I can take care of business on my serve and hopefully I’m getting good looks, but I’ve just got to stay patient against him,” Shapovalov said.

The 22-year-old comes into the year’s first Grand Slam with some momentum having won the men’s ATP Cup earlier this month in Sydney alongside Canadian teammates Felix Auger-Aliassime, Brayden Schnur and Steven Diez.

Fatigue from a recent bout of COVID-19 forced Shapovalov to sit out the start of the tournament but he said earlier this week he was back to feeling 100 per cent.

“Towards the end of the [ATP Cup] I got really comfortable, and the body felt good again, so that was a good sign. And, of course, leading up to this tournament I had little aches and pains, so I wasn’t practising too much but I’m really happy after the two matches that the body is feeling good and it’s definitely a good sign.”