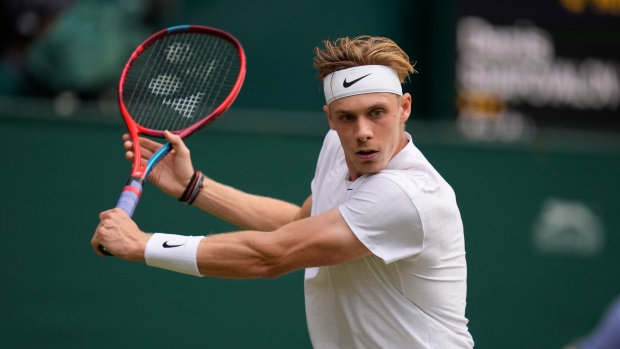 LONDON — Canada's Denis Shapovalov reached Wimbledon's fourth round for the first time in his career and played All England Club spoiler by downing Britain's Andy Murray in straight sets Friday.

Shapovalov of Richmond Hill, Ont., ousted the two-time Wimbledon champion 6-4, 6-2, 6-2 to advance to the grass court Grand Slam's round of 16.

The 22-year-old Canadian was in control throughout the match in his centre-court debut with 13 aces and a 45-16 edge in winners.

The 10th seed faces No. 8 Roberto Bautista Agut of Spain on Monday. Agut reached the semifinals in 2019.

Shapovalov took an early lead and won 6-of-11 break points in his first career match versus Murray, who won just 1-of-9.

The 34-year-old Scotsman is attempting a comeback in tennis after two hip operations.

The match paused after the second set to activate the centre-court lights and the contest was completed in two hours 17 minutes.

Montreal's Felix Auger-Aliassime, seeded 16th, takes on Nick Kyrgios of Australia in the third round Saturday.

Shapovalov moved onto the third round via a walkover when Spaniard Pablo Andujar withdrew. That gave the Canadian more recovery time from a five-set win over Germany's Philipp Kohlschreiber to open the tournament.

Shapovalov reached the U.S. Open quarterfinals last year and the fourth round of the Australian Open in 2017.

This report by The Canadian Press was first published July 2, 2021.

Note to readers: This is a corrected story. A previous version said Shapovalov made it through to the quarterfinals.