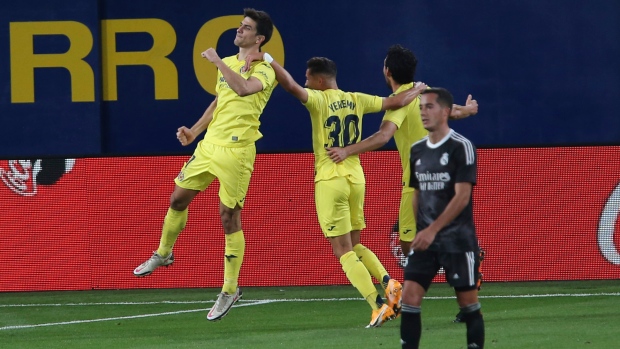 VILLARREAL, Spain — Goalkeeper Thibaut Courtois gave away a penalty as a Real Madrid side missing several players drew 1-1 with Villarreal in the Spanish league on Saturday.

In only his second appearance of the season, striker Mariano Díaz scored a goal three minutes after kickoff in a promising start for Madrid at Villarreal’s Estadio de la Cerámica.

But Spain striker Gerard Moreno levelled from the penalty spot in the 76th after Courtois cut down Samuel Chukwueze while trying to reach the ball.

Unai Emery’s Villarreal remained unbeaten in all competitions at home this campaign. The draw left Villarreal in third place, one point behind leader Real Sociedad and Atlético Madrid.

The slip by Madrid came a round after it was beaten 4-1 at Valencia, when Courtois was unable to stop three penalties. Zinedine Zidane’s side stayed in fourth place.

Madrid was missing Sergio Ramos, Karim Benzema and Federico Valverde due to injury. Casemiro, Éder Militão and Luka Jovic were unavailable after testing positive for the coronavirus.

“We were missing very important players, but that can’t be an excuse. We have a deep enough squad to compete in every game,” said defender Nacho Fernández, who started in place of Ramos.

Despite the absences and having to play the little-used Díaz up front, Zidane still had a starting 11 containing Luka Modric, Toni Kroos, Raphael Varane and Eden Hazard, who returned after one round out with a coronavirus infection.

Also back was Dani Carvajal in his first match since injuring his right knee in September. The right back placed a short cross for Díaz to head home after he held off his marker.

Madrid controlled the rest of the first half, but the hosts improved after the restart and pushed the action into Courtois’ area.

After Dani Parejo and Moreno had both gone close with shots, Emery sent on Chukwueze and Pervis Estupiñán. The reinforcements linked up to produce the equalizer when Estupiñán sent a long ball into the box to meet Chukwueze’s run, and Courtois rushed out and swept him off his feet.

“We worked hard, got our goal, and had the feeling that we could have gotten a better result,” Moreno said.