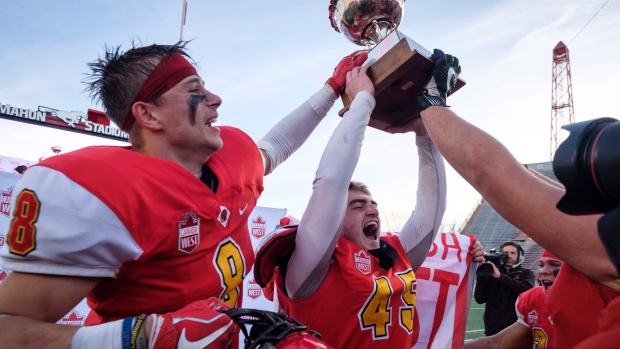 CALGARY — Niko DiFonte kicked a U Sports record 59-yard field goal with no time left in the fourth quarter as the Calgary Dinos edged the UBC Thunderbirds 44-43 on Saturday to win the 81st Hardy Cup.

Calgary won the Canada West title for the second-straight season and will host the Laval Rouge et Or on Nov. 18 in the Mitchell Bowl. It will be a rematch of last year's Vanier Cup in Hamilton when Laval beat the Dinos.

Calgary quarterback Adam Sinagra was 26 of 37 for 344 yards, three touchdowns and an interception. Robert Stewart ran 198 yards on 37 carries and Hutner Karl caught two TDs and finished the game with nine receptions for 187 yards for the Dinos.

Alex Morrison caught two TDs for the Thunderbirds while Ben Cummings ran in a touchdown and caught another.

Laval advanced to the Mitchell Bowl after a 25-22 victory over the Montreal Carabins in the Dunsmore Cup.