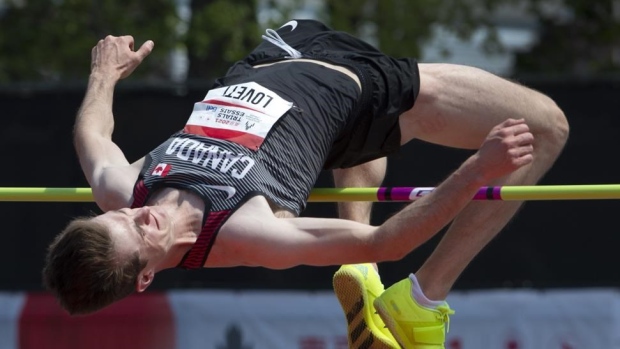 MONACO — Canada's Django Lovett captured silver in the men's high jump while Marco Arop narrowly missed the Canadian record in winning bronze in the men's 800 metres at the Monaco Diamond League on Friday.

Lovett, who clinched his Tokyo Olympic berth two weeks ago at the trials in Montreal, cleared 2.29 metres to finish behind Mikhail Akimenko (2.32), a Russian athlete who will compete in Tokyo as an "authorized neutral athlete."

Arop, a 22-year-old from Edmonton, ran a gutsy 800, leading until the final 20 metres to finish in a personal best one minute 43.26 seconds. He was less than a tenth of a second off Brandon McBride's national record of 1:43.20.

De Grasse, a three-time Olympic medallist, ran 10.00 to finish just outside the medals in the strongest field he's raced in this season. The 26-year-old from Markham, Ont., was coming off back-to-back 200 victories in the past week.

Arop will make his Olympic debut in Tokyo. The 2019 Pan American Games gold medallist won silver at the Diamond League stop in Stockholm on Sunday.

Arop was born in Khartoum, Sudan, but his family fled to Egypt to escape the Sudanese civil war. They eventually settled in Edmonton in 2002.

This report by The Canadian Press was first published July 9, 2021.