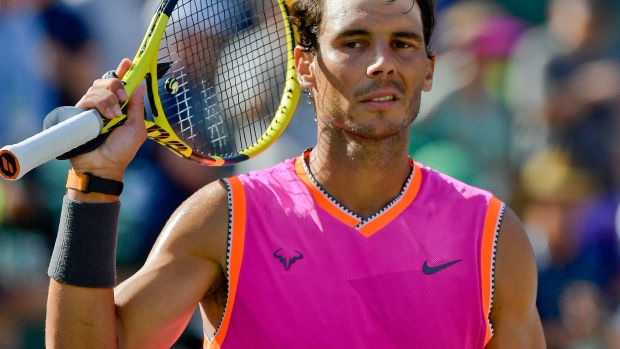 MONACO — Defending champion Rafael Nadal and top-ranked Novak Djokovic eased into the Monte Carlo Masters quarterfinals on Thursday, remaining on course to meet in the final of the clay-court tournament they've long dominated.

The two rivals, who share 32 Grand Slam titles, could meet for a 54th time. They have won every tournament here since 2005 except for 2014. Nadal has won it a record 11 times overall, but Djokovic ended his 46-match winning streak in the 2013 edition and added another title two years later.

Nadal has won the last three editions, though, including last year's without dropping a set.

After the 15-time Grand Slam champion Djokovic beat unseeded American Taylor Fritz 6-3, 6-0, the 17-time major winner Nadal handed Grigor Dimitrov yet another defeat, beating him 6-4, 6-1 in a repeat score of last year's semifinal between the two.

Nadal improved to 12-1 overall against the unseeded Bulgarian, who made two big unforced errors on his forehand at 30-30 in the 10th game of the first set.

Serving for a place in the last eight, Nadal clinched victory on his second match point when Dimitrov patted a forehand into the net.

"I am happy the way that I am playing," said Nadal, who beat Roberto Bautista Agut 6-1, 6-1 in the previous round. "The first two matches I played more than enough well to win. I had confident scores against two good players."

The second-ranked Spaniard will next play Guido Pella, having won both previous matches against the unseeded Argentine.

Djokovic, who has won the past three Grand Slams, won on his first match point against the 21-year-old Fritz.

"Taylor plays really quick and has a big serve and just flattens the ball," Djokovic said. "(He) doesn't really have a clay court game, but he has done well this tournament. I just managed to break his resistance."

Djokovic will next play 10th-seeded Daniil Medvedev of Russia.

Djokovic won the three previous matches against the 23-year-old Medvedev, including a tough four-set encounter in the fourth round at this year's Australian Open, but Friday's match will be their first meeting on clay.

"He's close to top 10 in the world. He's definitely in the form of his life," Djokovic said. "He's had a good tournament so far here, winning quite comfortably in the first two matches and now against Tsitsipas."

"It's the best match of my life," said the 48th-ranked Lajovic, who has never won a career title.

In another upset, No. 13 Fabio Fognini got the better of No. 3 Alexander Zverev 7-6 (6), 6-1, prompting raucous cheers from the large number of fans who crossed over the nearby border with Italy.

Fognini should have plenty of support when he plays No. 9 Borna Coric of Croatia, who beat unseeded Frenchman Pierre-Hugues Herbert 6-4, 6-2. Coric won on his fifth match point with a forehand winner down the right.