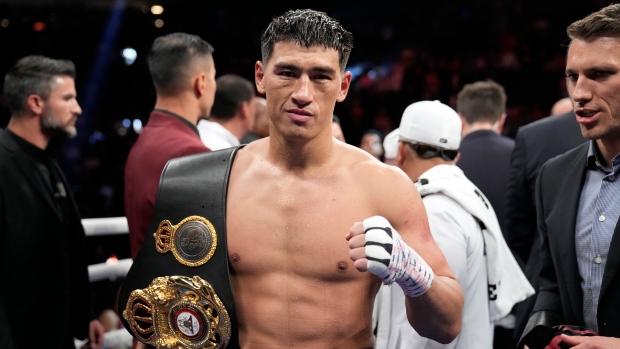 Alvarez moved back up to the heaviest weight of his career to contend for the 175-pound title.

Alvarez fought at light heavyweight only one other time in his career, beating Sergey Kovalev in late 2019.

After opening the fight with a trio of very close rounds, it was clear Bivol would be able to utilize his advantages with reach and height, to pepper Alvarez and keep him off when charging with his power punches.

Alvarez tried, at times, to use his intimidating tactics to taunt Bivol.

With a rematch clause in the contract, Alvarez said afterward in the ring he wanted a rematch with the Kyrgyzstan-born Russian champion.

In the co-main event at 140 pounds, Montana Love (18-0-1, 10 KOs) beat Gabriel Valenzuela (25-3-1, 15 KOs) by unanimous decision with identical scores from all three judges (114-112). With the win, Love solidifies himself as a contender in the junior welterweight division.

Zhilei Zhang (24-0-1, 19 KOs) knocked out Scott Alexander just 1:54 in the first round in a heavyweight clash. Alexander was a replacement after Filip Hrgovic was forced to withdraw from his scheduled bout against Zhang.