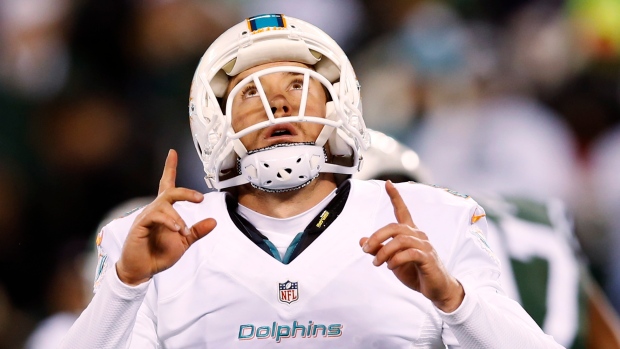 EAST RUTHERFORD, N.J. - It's all in the mindset.

"Scratch, claw, bite, kick, whatever you have to do make a play and win," Dolphins defensive end Cameron Wake explained after Monday night's dull but effective slugfest with the New York Jets ended in a 16-13 Miami victory.

"It's December," added rookie receiver Jarvis Landry. "The only thing that matters is winning, no matter how you get it done."

The Dolphins found the right formula to stay in the AFC playoff race: Simply let the Jets run the ball all night, and wait for New York to make mistakes — something the Jets have done quite well all season.

The Dolphins remained a factor in the wild-card race thanks to special teams; Landry's eight receptions; Lamar Miller's 4-yard TD run early in the fourth quarter; and plenty of defence when the Jets needed to pass.

All of that offset a season high on the ground as Chris Johnson had his best performance for the Jets with 105 yards.

"We had to draw a line in the dirt. No more," Wake said of his team's stinginess after halftime. "We came out in the second half scheme-wise the same, but guys played the way they're supposed to play."

Sturgis also made field goals of 43 and 44 yards.

After trailing most of the way, Miami tied it on Miller's run with 10:24 remaining. That brought the loudest cheers of the night; thousands of Dolphins fans at MetLife Stadium braved the wet, windy conditions.

Jets problems with penalties on special teams hurt them all night, and a holding call against Saalim Hakim set up the Dolphins at New York's 39 on the tying drive. On the winning possession, backup tight end Dion Sims had catches of 18 and 17 yards.

The Jets kept pounding the ball effectively. They even got into field goal position after Miami made it 13-13. But Koa Misi's sack pushed New York back to the Miami 27 and Folk missed wide left for the second time. Folk had made 18 of 20 entering the game.

That's the way the Jets' season has gone, of course.

Early on, Greg Salas, with his fourth team in four pro seasons, scored his first career touchdown. But the receiver didn't get it through the air, instead scoring on a well-conceived reverse on which the Dolphins had no one close to him until he reached the 2. He dived into the end zone to cap an 85-yard drive, but that ended his night; Salas hurt a hamstring.

Sturgis missed a 43-yard field goal on the next possession for Miami, further boosting New York's confidence. The Jets took the ball into Dolphins territory for the third successive series, and got more points on Folk's 40-yard field goal.

As New York kept grinding away on the ground — it had 210 yards rushing in the opening half — it also ate up the clock. But Folk missed from 48 yards and Miami took advantage on Sturgis' 43-yard field goal to end the half.

Sturgis added his 44-yarder to start the second half, and Folk followed with a 45-yarder that bounced off the crossbar and through, making it 13-6.

Then came two huge plays that led to, well, nothing.

Dion Jordan partially blocked Ryan Quigley's punt, resulting in a 6-yard kick to the New York 41. It was the second straight week an opponent got a piece of a Quigley punt.

On the next play, though, Miller bobbled Ryan Tannehill's short pass and the ball squirted into cornerback Darrin Walls' hands. Walls slipped, got up and returned the interception 25 yards to the Dolphins 30. But Wake got a sack — he leads Miami with 9 1-2 — and that forced a punt.

NOTES: Tannehill was 25 of 35 for 235 yards. Smith threw for 65 yards on his seven completions, but also was sacked twice for minus-16 yards ... New York's previous rushing high this season was 218 vs. New England. ... Dozens of Jets alums were on hand, including three living Hall of Famers: Joe Namath, Curtis Martin and Don Maynard. They celebrated former owner Leon Hess and former receiver Wayne Chrebet's induction into the team's ring of honour. ... Dolphins WR Brian Hartline left with a knee injury.