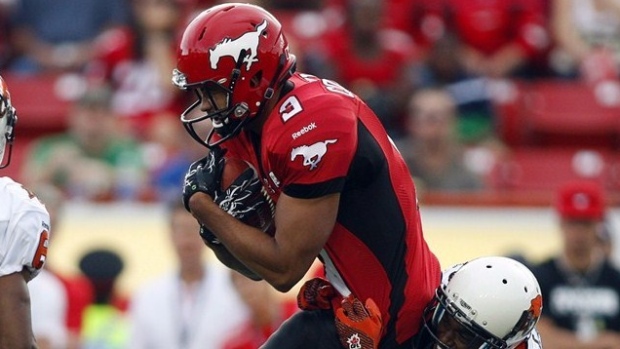 Calgary has been a haven for elite quarterbacks over the years, with names like Jeff Garcia, Henry Burris, and current starter Bo Levi Mitchell all having played for the Stampeders. But Flutie got the nod at the quarterback spot for his four seasons in Calgary (1992-95), three of which resulted in winning the Most Outstanding Player Award.

Cornish earned one of the running back spots after setting the bar for Canadians at the position during his nine-year career with the Stamps. Cornish was named the league’s Most Outstanding Player in 2013, the first time a running back had won the award since Mike Pringle in 1998, after finishing the year with 1,813 rushing yards. Cornish was also a three-time Most Outstanding Canadian and two-time Grey Cup champion during his time in Calgary.

Kicker Rene Paredes, a three-time CFL All-Star and the franchise’s all-time leader in field goal percentage (86.9 per cent), earned the active player spot on the all-time roster. While he’s the lone active player, a number of recent Stamps players joined him; punter Rob Maver and defensive back Brandon Smith, who both retired at the end of last season after long careers in Calgary, were both included on the list.

Two players still currently active but no longer on the Stampeders are on the roster in linebacker Alex Singleton, who is playing with the NFL’s Philadelphia Eagles, and defensive end Charleston Hughes, who is a member of the Saskatchewan Roughriders.

The legendary Wally Buono got the nod at head coach for being the winningest head coach in franchise history with an overall record of 153-79-2 and leading the Stampeders to three Grey Cups (1992, 1998, 2001) during his 13-year tenure at the helm in Calgary.

Other notable names on offence included on the all-time roster re Allen Pitts, the team’s all-time leader in receptions (966), receiving yards (14,891), and touchdowns (117), and Hall of Fame offensive lineman Rocco Romano.

Notable defensive players on the roster include defensive lineman Will Johnson, the franchise’s co-leader in sacks with Hughes with 99; linebacker Wayne Harris, an eight-time CFL All-Star and Canadian Football Hall of Famer; and defensive back Darryl Hall, a six-time All-Star and two-time Grey Cup champion.