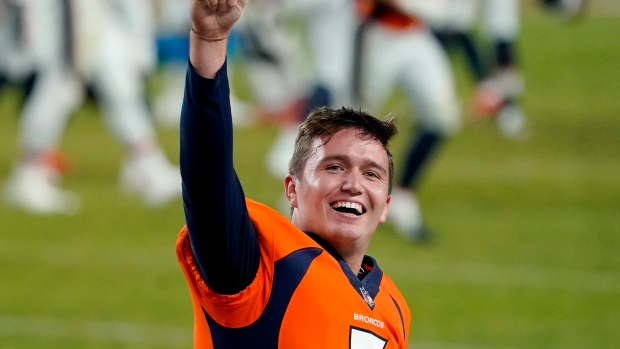 His 1-yard catch while tumbling out of bounds with no time left Sunday gave the Denver Broncos a stunning 31-30 win over the hard-luck Los Angeles Chargers.

“I don’t think I’ve ever caught a game-winner before in my life,” said Hamler, who got one foot and his butt down inbounds for his third catch of the day, doubling his season total.

The seeds of Denver's improbable comeback were planted at halftime. Drew Lock implored his scuffling teammates to dig deeper in a pep talk he admitted was a rallying cry to the man in the mirror.

“There’s always yelling when you have a half like that,” Lock said of the Broncos’ 60-yard performance that led to a 14-3 halftime deficit and being booed by the 5,700 fans allowed into Empower Field.

The deficit would grow to 24-3 before the halftime speech kicked in.

The anger was similar to last week’s 27-point loss to Kansas City when four turnovers negated a Denver defence that throttled Patrick Mahomes.

Lock called that one a “much deserved-slash-needed yelling, and it was kind of deja vu coming into that locker room (Sunday with) all the yelling and screaming."

After managing just a field goal on their first eight drives, the Broncos (3-4) scored TDs on four of their next five possessions.

They got the ball at their 19 down 30-24 with 2:24 and one timeout remaining. On fourth-and-4 from the Chargers 18 with 7 seconds left, Lock’s pass to rookie tight end Albert Okwuegbunam was incomplete. Defensive back Brandon Facyson was whistled for pass interference, giving the Broncos the ball at the 1 with 1 second remaining.

Lock rolled right as Hamler cut in front of him and raced to the right side of the end zone. When safety Rayshawn Jenkins left Hamler to charge at Lock, the second-year QB hit Hamler as he was falling, just out of cornerback Tevaughn Campbell's reach.

“When we were in the huddle I said to the team, ‘This is how legends are made right here.’ And then we got the play and everything went blank,” Hamler said. “As soon as I saw the ball coming to me, first thing I thought was just secure the catch and fall. Drew put it on the money.”

Brandon McManus nailed the extra point to seal the shocking win. The Chargers (2-5) lost their eighth straight AFC West game despite another stellar performance by rookie Justin Herbert, who joined Deshaun Watson as the only QBs in NFL history with four straight games with three TD passes.

Despite that, the Chargers became the first team in NFL history to blow leads of 16 points or more in four consecutive games.

“We had it completely under control and the way we lost a game today, that is unacceptable,” Chargers coach Anthony Lynn said. “And I take full responsibility for that.”

“We have to learn how to finish,” Jenkins said. “We can’t let these games like this slip away. This is the NFL. It don’t make sense. We’re going to try to fix it and move forward.”

After a slow start, the Chargers got two quick 80-yard touchdown drives in the final 1:48 of the first half to take a 14-3 lead.

Herbert hit Kennan Allen for a 9-yard score to make it 7-3 and Denver went three-and-out. Sam Martin’s punt travelled 69 yards — 9 yards more than Denver’s offence managed in the first half — into the end zone.

Herbert then directed another 80-yard drive, this one taking less than a minute and including a 36-yard throw to Mike Williams to the Denver 2 on rookie cornerback Michael Ojemudia with 22 seconds left. One play later, Herbert rolled right and fired a 2-yard touchdown strike to fullback Gabe Nabers.

“We held that team to 1 yard rushing in the first half (actually 2). In the second half they started running the ball all over us,” Lynn lamented.

Lock, who had thrown just one TD this season, admitted he was “worried about my job” at halftime."

“But I came in the locker room and when I gave that talk, it all just flushed out. I was like all right, I said it. It was like a therapy session," Lock said.

He threw TD passes to DaeSean Hamilton, Okwuegbunam and Hamler while throwing for 190 yards after halftime, and Phillip Lindsay raced for a 55-yard score as the Broncos piled up 104 yards rushing after halftime.

Chargers: DE Joey Bosa was out at the end while being evaluated for a concussion.

Both teams’ work weeks were interrupted by the novel coronavirus with Chargers backup guard Ryan Groy and Broncos starting right guard Graham Glasgow both going on the COVID-19/reserve list. Groy had started the past three games at right guard for Trai Turner (groin). The Broncos also were without two assistant coaches who were under COVID-19 protocols: defensive co-ordinator Ed Donatell and O-line coach Mike Munchak.

Chargers: host the Raiders on Sunday.

Broncos: visit the Falcons on Sunday.