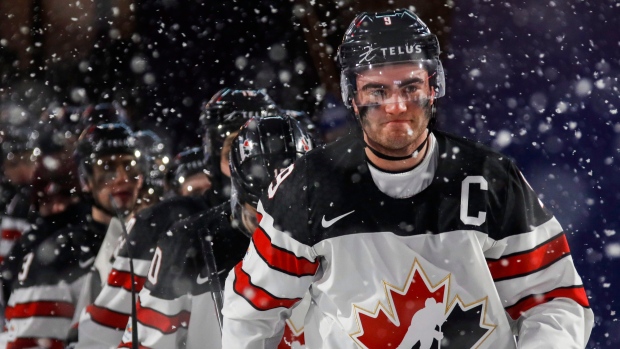 BUFFALO, N.Y. — Canada finished first in Group A at the world junior hockey championship, setting up a quarterfinal matchup against Switzerland on Tuesday afternoon. Here are three things to know heading into the game.

100 PER CENT HEALTHY — Injuries, especially to Canada's defensive corps, have been an ongoing issue, but head coach Dominique Ducharme insists that his roster is totally healthy for Tuesday's game. Canada has been helped by having two days off ahead of the world junior playoffs and Ducharme was able to rest banged up players for whole periods in an 8-0 rout of Denmark on Saturday. Everyone but defenceman Victor Mete practised on Monday afternoon and Ducharme says Mete just needed an extra day off.

"It's important to be able to come into the quarters like this, and to be healthy like we are," said Ducharme. "We're 100 per cent right now. We'll be 100 per cent when we start the game."

HEAD GAMES — Swiss head coach Christian Wohlwend said he expects Canada to easily beat his team in the quarterfinals. In a televised interview, he listed all the ways Canada is superior to Switzerland, including their seven first-round NHL picks and an 8-1 Canadian victory in a pre-tournament exhibition less than a week before the world juniors began. Canadian captain Dillon Dube thinks Wohlwend is just employing psychological warfare.

SECRET WEAPON — Canada's junior team has struggled in the shootout the past two years. They have had no goals in nine attempts over the past two tournaments, leading to losses against the United States twice. On Monday, Canada worked on shootout moves at practice and 13th forward Tyler Steenbergen stood out. Rarely earning minutes except on the power play, he is an offensive specialist with 35 goals and 26 assists in 27 games for the Western Hockey League's Swift Current Broncos.

"I think the best, for me, just the most calm was Steenbergen," said Dube when asked who the best skater was in the shootout. "He just walked in there and shot everything and everything hit his target. It was impressive."