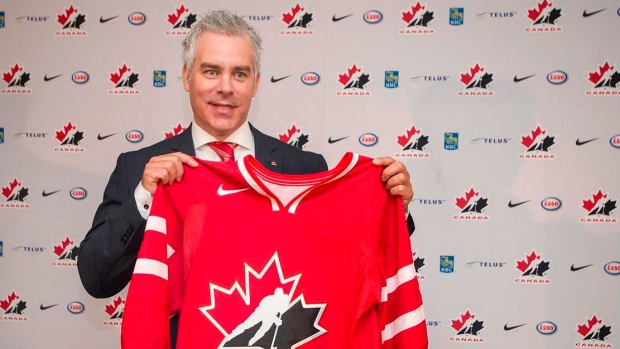 The Drummondville Voltigeurs bench boss used that word a lot when he was introduced Monday as head coach of the Canadian team for the event Dec. 26-Jan 5 in Toronto and Montreal.

"We want to build a special team made of special players," said Ducharme. "It's quite different to go from playing (major junior) hockey in December to, within two weeks, playing in what I qualify as Game 7 finals.

"You have to be able to adapt, to take a different role, but stay yourself at the same time. To do that, you have to be special."

They will be on the hotseat as Canada looks to rebound from a so-so 2016 tournament, when it was beaten by eventual champion Finland in the quarter-finals in Helsinki. Ducharme was an assistant coach under Dave Lowry for that tournament. Notably, he elected to stay on and finish out the tournament after his father Jacques died during the group stage.

"I don't feel pressure," said Ducharme, a native of Joliette, Que. "Once you're well prepared, you're ready to face a lot of things."

It will be the second time in three years the event is held in Canada's two biggest cities. The hosts won gold in 2015 under coach Benoit Groulx and with Connor McDavid leading the attack.

Ducharme was hired by the Voltigeurs in April after turning down a contract extension with Halifax. He spent the last five seasons with the Mooseheads, winning a Memorial Cup in 2013 with stars like Nathan MacKinnon and Jonathan Drouin on his roster, but wanted to move back to Quebec to be closer to his family.

There was no resistance from Drummondville over his taking the world junior job. The Voltigeurs have been through it before when Guy Boucher worked as an assistant coach on Canada's 2009 championship team.

"They saw it in a positive way," said Ducharme. "I think it will make me a better coach."

He also won gold as an assistant coach with Canada's under-18 squad at the Ivan Hlinka tournament in 2013.

"I looked at last year's experience at the world junior championship in Finland. That was very important. We think we have a terrific leader who can not only lead his players but also his coaching staff and the staff around him. It's important to keep everyone locked in and motivated and Dom does that better than anybody."

Even more so with a tournament played on home ice.

"There is always pressure, but competitors love that," said Renney. "I can't imagine he would want it to be anywhere else than Canada and Montreal.

"Pressure and Dom Ducharme are very friendly with each other."

As a player, Ducharme spent four seasons for the University of Vermont, where his teammates included Martin St. Louis and Tim Thomas, before embarking on a pro career spent mostly in Europe.