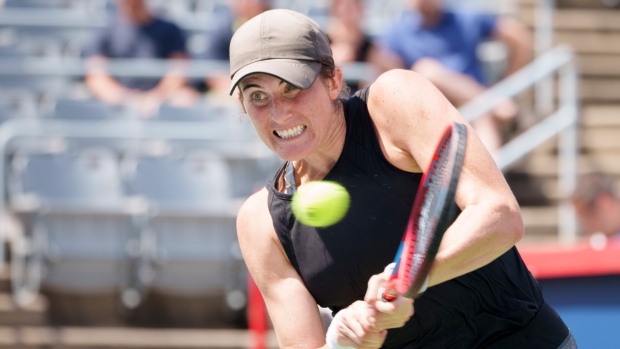 The 22-year-old from Richmond Hill, Ont., made an early exit from the second round of the National Bank Open, dropping a 6-1, 6-4 decision to American Frances Tiafoe.

“Obviously it’s not an ideal performance, so I’m definitely not too happy," Shapovalov told reporters after the loss.

Shapovalov came into the tournament as the No. 5 seed with a bye through the first round. Tiafoe, meanwhile, was awarded a spot in the main draw as a "lucky loser" after falling to Finland's Emil Ruusuvuori in qualifying. He then downed Yoshihito Nishioka of Japan in straight sets to advance to the second round.

The experience showed on Wednesday, said Shapovalov, the world No. 10.

“(Tiafoe) has a lot of matches under his belt under these conditions and he was the better player today. It was obvious," the Canadian said. “I just didn’t feel comfortable ever in the match and you could see he was comfortable. … It’s always tough to go up against guys like this.”

With wind swirling at centre court, Shapovalov struggled with his serve and handed his opponent a 3-1 lead in the first set by double faulting on a break point. He had nine double faults across the one-hour, 15-minute match and didn't get a single chance for a break point.

Tiafoe, 23, played an aggressive match, luring Shapovalov to the net several times, only to place the ball in behind him.

A gritty battle ensued midway through the second set, with Shapovalov forced to work his way back from a triple break point to gain the advantage. Tiafoe wasn't about to relent, though, and forced a fifth, sixth and seventh break point before finally winning the game on an extended volley.

Tiafoe will face France's Gael Monfils in the third round on Thursday after the tournament's No. 11 seed beat John Millman of Australia 3-6, 6-3, 6-4.

Shapovalov was the second Canadian man eliminated from the event, formerly known as the Rogers Cup, on Wednesday. Earlier in the day, Montreal’s Felix Auger-Aliassime lost to Dusan Lajovic of Serbia in straight sets.

"I thought I could have done better in many moments, a few key points," said Auger-Aliassime, who entered the tournament as the No. 9 seed. "There was a couple of points I think I let go too easy on him and in the end, that wasn’t good enough."

Canadians are faring much better on the women’s side in Montreal, where wild-card entry Rebecca Marino posted a 1-6, 7-5, 6-4 win over Spain’s Paula Badosa in the second round Wednesday.

“It’s nice to get those back-to-back wins. But I feel like I’m no longer a surprise, everyone kind of knows who I am," said the Vancouver native, who’s currently ranked 220 in the world.

Marino attained a career-high No. 38 WTA ranking back in 2011, but stepped away from the sport for nearly five years to deal with depression.

"But at least (the wins) demonstrate to me that I belong back at this level. I really believe that. And now I have the evidence.”

Marino struggled early Wednesday and Badosa jumped out to a 4-0 lead in the first set.

But the Canadian settled in and battled back, taking the second set and breaking Badosa twice in the third before sealing the two-hour, 14-minute match with an ace to advance to the third round.

Marino saved 11-of-17 break points across the match and hit nine aces, while Badosa had 10 double faults and saved 5-of-10 break points.

“I’m really, really proud of that performance, for turning it around and obviously for reaching the third round here," she said.

Marino will face Aryna Sabalenka of Belarus in the round of 16 on Thursday.

While Marino's confident in how she's been playing, she knows Sabalenka presents her biggest challenge yet at the tournament.

“I feel like I’m the underdog in all these matches," said the Canadian. "I feel like I can’t sell myself short, so I’m just going to try to step up to the plate, do my best against her. That’s a bit of a tall order, but you know, if I just come play my A-game, I feel like I can stand with all these girls."

Marino didn't get much of a rest after beating Badosa Wednesday. Hours after her win, she was back on the court with Montreal's Leylah Annie Fernandez to face American Ingrid Neel and Elixane Lechemia of France in women's doubles.

Fernandez and Marino won 5-7, 6-3, 10-2 in an hour and 29 minutes, and will meet Sabalenka and Germany's Elise Mertens in the third round Thursday.

Bianca Andreescu of Mississauga, Ont., will also be back in action Thursday facing No. 13 seed Ons Jabeur of Tunisia in the round of 16.

The 21-year-old Andreescu is looking to defend her title after winning the tournament in 2019.

No 4 Karolina Pliskova of the Czech Rebulic, No. 11 Maria Sakkari of Greece and Coco Gauff, the 15th-seeded American, all won to advance on Wednesday, while Britain's Johanna Konta ousted third-seeded Ukarainian Elina Svitolina.

American Danielle Collins upset No. 6 Simona Halep of Romania, and Jessica Pegula of the U.S. got by 10th-seeded Anastasia Pavlyuchenkova.

This report by The Canadian Press was first published Aug. 11, 2021.