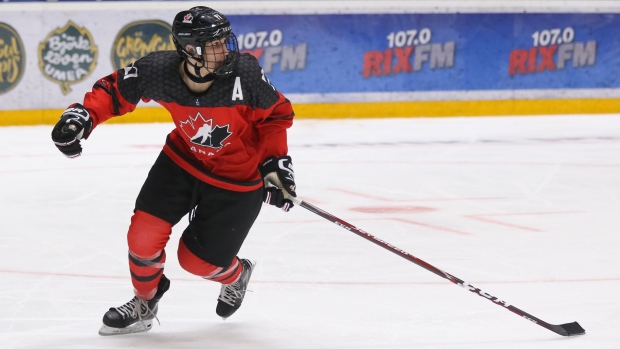 In June 2019, Dylan Cozens became the first player from Yukon to be picked in the first round of the National Hockey League draft. In December, he became the first player from Yukon to represent Team Canada at the World Juniors. The Lethbridge Hurricanes centre has brought a lot of pride to the territory, Canada's smallest by population, but usually doesn't get to spend all that much time there.​

"This is the longest I've been home in probably the last five or six years," said Cozens, who moved to British Columbia at age 14 to pursue his hockey career. "It's been good to spend some time with my family and just get out on the lake fishing, get out hunting."

The COVID-19 pandemic, which halted the Canadian Hockey League season before the playoffs in March, allowed Cozens to head north for an extended stay. And he recently got to experience something new by going on his first moose hunt.

"We're way out in the bush, like, way, way out, so no [phone] service for four days," the 19-year-old Whitehorse native said. "So, you just realize anything can happen. Like, we see bears walking around us and we've always got to be on our toes and be ready for a situation like that. It was just an experience I felt I needed to have being from Yukon, you know, getting out and going on my first big hunt ... I didn't realize how much work it was to go on a moose hunt and then cleaning the moose, skinning them, taking all the meat."

All three members of the hunting party ended up with a moose.

"It was a crazy experience," Cozens said. "The type of adrenaline rush you get when you're just about to pull that trigger is pretty crazy."

Cozens is now taking aim at a roster spot in the NHL and another gold medal at the World Juniors. The Sabres prospect, picked seventh overall,  believes he can make the team whenever the next season begins. He's also keeping an eye on the World Juniors, which will be held in Edmonton as scheduled albeit it in a bubble and without fans. Cozens is one of seven potential returnees for Team Canada and a leading contender to be captain.

Cozens spoke to TSN via Zoom this week about his leadership style and why he believes he's ready to take a big step in his career. The following is an edited transcript of the conversation.

What was your reaction to the news the 2021 World Juniors will be held?

"It's definitely good news that it's still going to happen [considering] all the other things that had been cancelled. The way they've done the NHL bubble seems to work so I see no reason why they should cancel the World Juniors."

What will it be like to play without fans?

"We definitely would've had a pretty big advantage being on home ice with all the fans, but we'll have to create our own energy. It's definitely going to be intense. The boys are going to have to get each other up and the bench is going to have to be the energy producer."

“We think there’s an opportunity to continue this Christmas tradition...”@HockeyCanada President Scott Smith talks to @GinoRedaTSN about the decision to play this year’s #WorldJuniors in the Edmonton bubble: https://t.co/6XcbwKkFBa#TSNHockey pic.twitter.com/eG0OuToEkX

Let's play word association with some of your Ostrava teammates. What's the first thing that pops into your mind when you think of Vancouver Giants defenceman Bowen Byram?

"Energy producer. You know, he's always laughing, he's always in a good mood, he's always getting the guys going and he's a guy that you definitely want around your team. He keeps the mood up and is also an unbelievable player too and a great guy to be around."

"Agile. He's so agile with the puck, so shifty and you never know which way he's going to go. He's a great player and another guy who's fun to be around."

"That's a pretty easy one: Sniper. You look at the guy's shot and his release is so quick. He's just got an unbelievable shot."

"He gets to the dirty areas and he's skilled. He's a great hockey player."

"Speed. He's so big and strong and then it's his speed. He just, you know, blows by guys. He's a funny guy too."

"Superstar. That's an obvious one. I think we can all [agree]. That's the first thing that pops to mind. He's a game changer. He's a guy that when he's out there he's always making a difference and always a threat to score."

Topped by Lafreniere, Byfield and Stutzle round out the top 3 of Button's mock draft.@CraigJButton has more: https://t.co/COAOZqjrJ3 pic.twitter.com/QJv8RZ1yKa

The returning guys will be leaned on to lead the way and TSN director of scouting Craig Button has identified you as a potential captain. How would you describe your leadership style?

"Growing up I've been more of a leader than a follower. I like to lead by example whether it's on or off the ice. I'm just a guy who likes to help others out and if I do get the chance to be one of the leaders of that team I wouldn't take that lightly. Wearing a letter for Team Canada on a stage like the World Juniors is an honour that not many people get to experience so it'd be unbelievable for me."

What leaders did you admire growing up?

"The one player that I looked up to was Jonathan Toews. Just the kind of leader he was off the ice and also on the ice. He just kind of leads by example and was a player I watched a lot growing up."

We don't know when the next NHL season will actually start, but how confident are you about making that jump?

"I'm confident that I've put in the work this off-season to be able to make the jump to the next level and play in the NHL and that's my goal. I want to be on Buffalo and I'll continue to work as hard as I can to be there."

What have you been focusing on in the off-season?

"Getting my body to be able to play a full 82-game season in the NHL against NHL players. I think that's one part that I wasn't quite ready for last year so I've taken that into consideration. I've just been working really hard on my body so I'm able to play against those guys, stronger guys, and a faster game."

"Just grinding in the off-season and building up your lactate retention and how much your legs can handle and being able to go back-to-back nights with travel. I got to experience that a bit in the WHL, but it's a whole different beast at the NHL level. So, just putting on muscle mass and conditioning your legs to handle that."

The Sabres made a management change this off-season. Jason Botterill, the man who drafted you, is gone. What has been the message from his replacement, Kevyn Adams?

"Just to work as hard as I can to make sure I'm there next season and do whatever it takes to give myself the best chance to be a part of the Sabres team."

Buffalo just acquired Eric Staal who has already said he wants to be a sounding board for you and help you in your development. What does that mean?

"That's huge. You look at his resume and he's won a Stanley Cup and he's been around for a while. He's a veteran in the league so to be able to hopefully go in and learn from him and look up to him as a role model and a guy to show me what it takes to play in the NHL, that'll be huge."

What's the next stage of this off-season look like for you?

"I'm going to be in Buffalo up until World Juniors or the start of the NHL season. So, just getting down there and training around NHL players will definitely help and push me more just being around them and seeing what it takes."