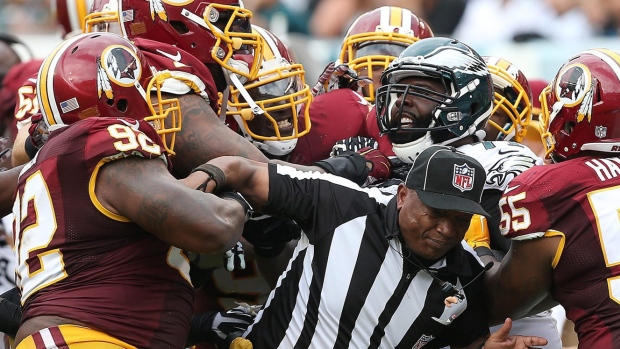 NEW YORK, N.Y. - Philadelphia Eagles left tackle Jason Peters was fined $10,000 by the NFL on Friday and Washington Redskins nose tackle Chris Baker $8,268 for their roles in a brawl between the teams last Sunday.

The fight began after Baker laid out Philadelphia quarterback Nick Foles with a blindside hit on an apparent interception in the fourth quarter.

Players from both teams pushed and shoved each other; Peters and Baker were both ejected. The interception was overturned on video review.

Peters' fine was for unnecessarily striking an opponent in the head area after the play was over. Baker's was for grabbing an opponent by the facemask.

Buffalo wide receiver Mike Williams was docked $11,025 for violating the NFL's dress code. He wore red socks instead of blue like his teammates.

Bills linebacker Brandon Spikes and San Francisco wide receiver Anquan Boldin were each fined $8,268 for unnecessarily head butting an opponent. Pittsburgh running back LeGarrette Blount was fined $5,000 for throwing the ball into the stands after his touchdown last week against Carolina.