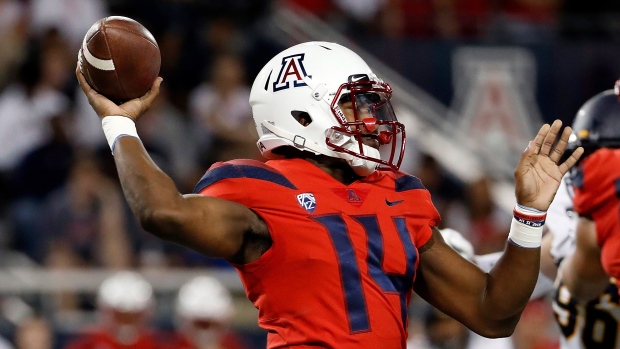 Tate, 23, amassed 6,318 passing yards and 57 touchdowns over four years at the University of Arizona. The dual-threat QB also added 2,285 rushing yards and 18 touchdowns on the ground across 40 collegiate games. Tate was signed by the NFL's Philadelphia Eagles, where he spent parts of 2020 and 2021 as a wide receiver.

Leonard, 24, was signed by the BC Lions following the 2019 season but was released prior to the 2021 season. Leonard played 22 games for Illinois State, catching 91 passes for 1,377 yards and 12 touchdowns. He attended Jacksonville Jaguars training camp in 2019 but was cut prior to the season.

Angulo, 24, was signed by the Winnipeg Blue Bombers last February but was cut in late July. He also participated in New York Giants training camp prior to the 2020 season and has stints with the San Francisco 49ers and Indianapolis Colts practice squads in 2020.

Dean, 26, was also signed and cut by the Blue Bombers in training camp. He finished the 2019 CFL season with the Saskatchewan Roughriders practice roster.