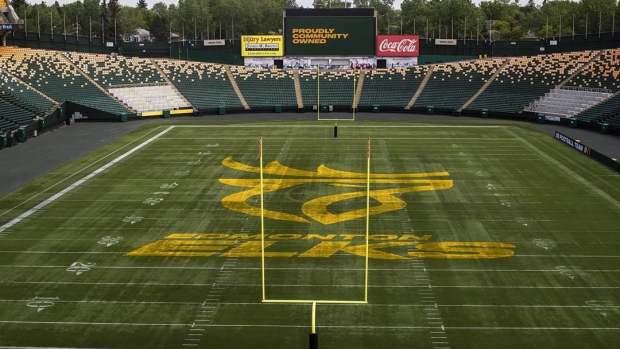 The Edmonton Elks have multiple positive COVID-19 test results and their Week 4 opener against the Toronto Argonauts has been postponed, the CFL confirmed Sunday.

The league said in a statement that the Elks "will not practice or travel until our Chief Medical Officers and public health officials have assured us it is safe for them to do so."

On the heels of @elks cancelling practice this morning, I’m hearing that there have been multiple positive covid tests and that this Thursday’s game vs #Argos is very much in jeopardy of being postponed. @CFLonTSN @TSN_Sports @TSN_Edge

TSN's Farhan Lalji tweets that five Elks players have tested positive and there are concerns more positives could be on the way as the week progresses. The team cancelled practice on Sunday morning.

Lalji reports Edmonton's Week 3 opponent from last Thursday, the BC Lions, had all their tests come back negative as of Saturday. The Elks had zero positive tests the morning of their matchup with the Lions.

#BCLions had all of their covid tests come back negative yesterday. @CFLonTSN @TSN_Sports

For those asking “how can this happen? As long as 36 players are available they should be all good?”
A reminder that government can trump all of that. And again, they’re simply not sure how many more cases will come on top of those that have already tested positive. @CFLonTSN

The Elks won the game 21-16 behind 127 yards on the ground from James Wilder Jr. and 148 yards receiving from Greg Ellingson.

While the Lions are still currently scheduled to face the Redblacks in Ottawa next Saturday, the league says they are being heavily monitored.

Here is the full statement from the CFL released Sunday night:

The Canadian Football League is postponing this Thursday’s game in Toronto between the Toronto Argonauts and Edmonton Elks after receiving word earlier today that a number of Elks players have tested positive for COVID-19. This is in keeping with the standard of care for COVID-19 and professional sport. It also reflects our desire to put the health and safety of our players, coaches and staff – as well as public health – above all other considerations.

The Elks will not practice or travel until our Chief Medical Officers and public health officials have assured us it is safe for them to do so. All of the Elks’ Tier One personnel, including players, coaches and support staff will now be subjected to an enhanced testing protocol which includes isolation.

The Elks’ most recent opponent, the BC Lions, will participate in an enhanced protocol and will be monitored closely this week.  Upon review with our Chief Medical Officers, we do not believe the Lions were exposed to a high risk of infection. The league is now working to reschedule the game between the Elks and the Argonauts.

We know this is disappointing news for CFL fans, but we are confident they will overwhelmingly support our decision to put safety first.