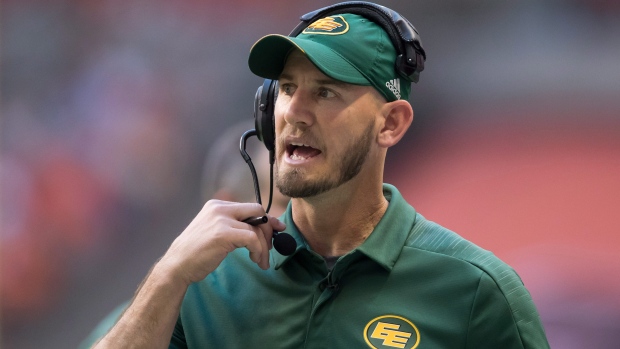 EDMONTON — The Edmonton Eskimos fired Jason Maas on Wednesday, ending his four-year run as head coach of the CFL team.

Maas guided the Eskimos to an 8-10 record this past season and a playoff berth as a crossover team. Edmonton dropped a 36-16 decision to Hamilton in the East Division final.

"Today's decision was difficult and not taken lightly," Eskimos general manager Brock Sunderland said in a release. "I thank Jason for his dedication and hard work while also wishing him the best in his future endeavours."

There was no immediate word on a replacement. Sunderland was scheduled to hold a media availability on Wednesday afternoon at Commonwealth Stadium.

Edmonton finished the regular-season at a 2-7-0 clip. The Eskimos defeated Montreal 37-29 in the East semifinal before falling to the Tiger-Cats.

Maas declined to answer a question about his coaching future in his post-game media session in Hamilton, saying it wasn't the time to address that. Quarterback Trevor Harris, however, spoke glowingly of his coach.

Over four seasons as head coach, Maas posted a 39-33 record in the regular season and 3-3 mark in the playoffs.