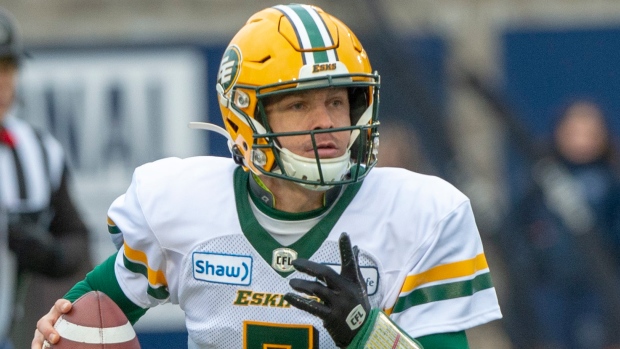 Edmonton Eskimos quarterback Trevor Harris believes he can play into his mid-40s after working out at Tom Brady’s TB12 Institute in February.

Harris contacted Brady’s staff following the 2019 CFL season. Harris, 33, is entering his eighth season in Canada, and considers himself a student of the 42-year-old Brady’s training methods.

“I was able to go work with [Brady’s] body coaches,” Harris said. “It was fun to learn the sorts of things [Brady] is doing, and tinkering with the way I’m doing things in my off-season.

“I’ve had thoughts that maybe I want to play until I’m 45 years old. I feel that I could easily do that with the training that I have right now, the way I’m taking care of myself, and the support that I have from my wife and kids. I don’t know if I see an end in sight.”

Brady’s facility is located across from Gillette Stadium in Foxboro, Mass. Harris said the fitness staff there challenged him to re-evaluate his approach to football training.

Harris said he also watches film of both Brady and 41-year-old New Orleans Saints star Drew Brees, analyzing what has allowed both Super Bowl-winning quarterbacks to play at a high level late in their careers.

If Brady and Brees can play well into their early 40s, Harris believes he can, too. He views longevity as testing his body's limits rather than trying to break records.

“I love football," Harris said. "It challenges me mentally, physically, emotionally, and I’m part of something bigger than myself. I love that about football. And I know that is never going to burn out."

Harris is known across the CFL for evolving his skills every off-season. Before the 2019 season, he learned to tap dance to increase his mobility.

Before starting any new training, Harris insists he needs to ask himself and others “Why?” because it helps him learn on a deeper level.

And after working with Brady's staff, Harris believes he understands what continues to keep the Tampa Bay Buccaneers pivot great after 20 seasons and six Super Bowl championships.