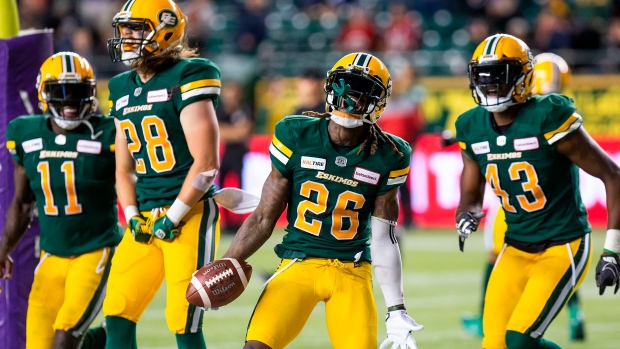 EDMONTON — The Edmonton Eskimos have a healthy, rested Trevor Harris back at quarterback for the CFL East semi-final against Montreal, but their fate may hinge on containing the explosive running and gunning X-factor that is Alouette QB Vernon Adams Jr.

Eskimos defensive back Josh Johnson says the best way to win is to take Adams' legs away from him.

"(And) He loves to still throw the ball once he gets out of the pocket. It just makes him more of a threat.

"The biggest thing is not letting him get outside of the pocket. Make him be more of a pocket quarterback and make him be more accurate (on his throws)."

Adams, 26, is having a breakout season, leading the Als to four fourth-quarter comeback wins en route to a 10-8 season and his first CFL playoff start.

The fourth-year pivot is winning with his arm and his feet, throwing for 3,942 yards and 24 touchdowns and running for 394 yards and another 12 majors.

He suggested the challenge with Adams is a case of now you see him, now you don't.

"He's great at getting out of things that look opportunistic for the defence," said Maas.

The winner of Sunday's game at Percival Molson Memorial Stadium will take on Hamilton in the East Final.

The key for Edmonton is a healthy Harris.

The eight-year CFL veteran has played only one game since early September while rehabbing a nagging injury to his throwing arm. Up to that point he led the CFL in passing stats, including a 14 to 3 touchdown to interception ratio.

Harris has said the arm feels good and now it's time to put the offence together, one that has been effective but has struggled in the red zone.

Harris is also hoping history will repeat itself. As an Ottawa Redblack he threw a record six TD-passes and completed almost 91 per cent of his passes in a 46-27 win over the Hamilton Tiger-Cats in last year's East Final.

The Alouettes finished second in the East despite a defensive line that struggled getting to the quarterback and a secondary susceptible to giving up the big play.

The Als sacked the quarterback a league-low 27 times in the regular season and allowed a CFL-worse 74 per cent opposition completions. They gave up 27 completions of 30 yards or more.

The Eskimos offensive line, meanwhile, allowed the fewest sacks at 25.

Edmonton finished 8-10 and hopes a mediocre regular season can be salvaged with a history making run to the 107th Grey Cup in Calgary.

History suggests they will fail as nine teams have previously tried and failed to make the championship game via the crossover.

Notes: The Alouettes announced Thursday that they've sold 20,000 tickets to the game and are removing banners over closed sections to make another 1,600 available.