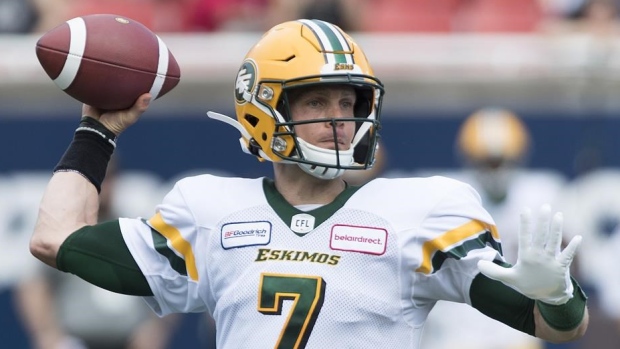 OTTAWA — With both teams slumping, the Ottawa Redblacks and Edmonton Eskimos fully understand the importance of Saturday's game at TD Place.

The Eskimos (6-7) are in the midst of a four-game losing streak and playoff implications will be on the line when they take on the Redblacks (3-10).

Sitting fourth in the CFL West, Edmonton currently holds the crossover playoff spot, but a win by the Redblacks would keep them in the running for the post-season as well, despite losing their last six games.

Ottawa needs to overtake Edmonton to make the playoffs.

"Every week gives you a little different motivation, but this week we know what's in store for us if we win this game and it's a motivating factor for sure," said Eskimos head coach Jason Maas.

The Eskimos will be missing league-leading quarterback Trevor Harris for the second game in a row.

Maas said there is no timetable for Harris' return from an upper-body injury, but is hopeful the former Redblack will be back before the end of the season

Logan Kilgore will be under centre Saturday and presumably for the foreseeable future. Kilgore, a five-year CFL veteran, threw for 223 yards and two touchdowns last week, but was picked off three times in a 30-27 loss to the Hamilton Tiger-Cats. The Ticats won on a field goal on the final play of the game.

"I think the best part about that performance being down 21-0 was Logan didn't press, he didn't try being anything different, he just kept playing and things started to go our way," said Maas. "That was a big thing for him. He just stayed even keel, there was no panic."

This would have marked Harris' first game in Ottawa since signing with the Eskimos as a free agent, but there still will be plenty of familiar faces. Five former Redblacks are expected in the Eskimos lineup, most notably receiver Greg Ellingson.

"It doesn't feel (strange), it really doesn't," said Ellingson. "I guess I spent more time on this field, in this stadium than I have anywhere else so it's not a surprise to me that it doesn't feel that strange. It feels good to be back."

Rather than focus on the slow start last week, the Eskimos are rallying around the final three quarters as they prepare for what they know is a desperate Redblacks team.

"The belief if something bad happens early to know that you just have to keep grinding like we did last week and you'll give yourself an opportunity," said Maas.

"I think that's what it did for our guys and it showed a lot of fight and it showed it through our whole organization, our whole team. Our meeting the next day and our meetings this week were very attentive. Guys understand what we're capable of, we just can't let anything slip up."

The Redblacks have their own issues at quarterback. After Dominique Davis struggled early this season, Jonathon Jennings got an opportunity to turn things around, but fared no better.

Now, the Redblacks are hoping a tandem effort could be the solution. Jennings is slated to start the game, but Davis is expected to get in as well in yet another effort to change things up.

"It's not an ideal situation," admitted Ottawa head coach Rick Campbell. "I don't think you would ever think this would be the best-case scenario, but I know that the definition of insanity is to keep doing the same thing and expecting a different result."

MAKE IT STOP: Another Ottawa loss would tie them with B.C. for the season's longest losing streak.

RED ZONE WORRIES: Ottawa has gone two games without scoring an offensive TD and a run of 44 straight possessions.

This report by The Canadian Press was first published Sept. 27, 2019.