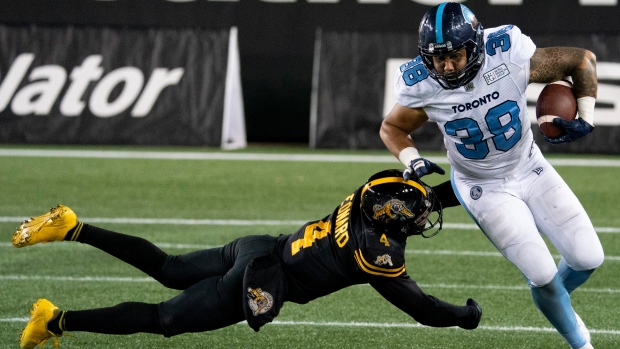 As CFL teams and players try to prepare for a 2020 season that has been indefinitely delayed, eight Toronto Argonauts took advantage of the team re-opening its facilities Monday.

The CFL approved the re-opening of all team facilities May 27 as long as teams adhered to provincial and municipal health guidelines.

The Argonauts' parent company, Maple Leaf Sports and Entertainment, delayed the opening of the Argonauts' facilities until June 8 to prepare health and safety protocols for players and staff.

Before arriving at the facilities Monday, players filled out a digital questionnaire with a range of health questions about symptoms and possible exposure to COVID-19.

If players answered "Yes" to any questions they were asked not to travel to the facilities.

Once at BMO Field or Coca-Cola Coliseum, a player must be wearing their own Personal Protective Equipment, and then send a text message to team staff who then meet the player at the facility doors.

Each player's temperature was checked before they entered the facility.

Players are permitted to work out in socially-distanced groups of three, with each player getting their own workout area as well as using their own set of team workout equipment.

There are cleaning staff on-site at BMO Field and Coca-Cola Coliseum to sanitize both workout areas and equipment after players leave. Players are not permitted to shower at the facilities.

All of the CFL's nine teams had staggered re-openings to their facilities following the league's announcement.

The Winnipeg Blue Bombers were the first team to re-open their facilities at IG Field on May 28.

When Coronavirus restrictions were first put in place, only players needing rehab treatment for injuries were allowed to use CFL team facilities.