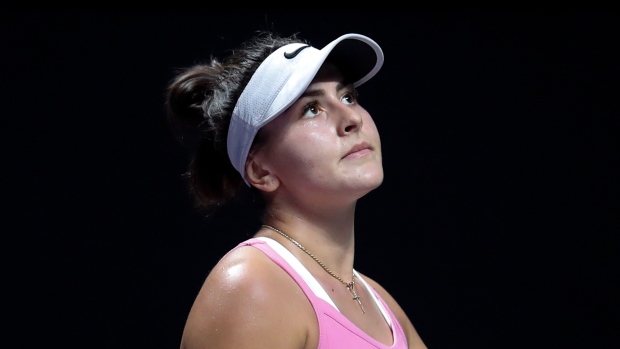 SHENZHEN, China — Canada's Bianca Andreescu was eliminated from the WTA Finals on Wednesday after retiring from her match against Karolina Pliskova with a left knee injury.

Andreescu was leading 2-0 in the first set, with Pliskova serving at 15-15 in the third game, when she came up limping after returning a serve and took a long medical timeout.

She had her knee taped and she played through the first set, even challenging Pliskova's serve with three break-point opportunities in the fifth game, but clearly struggled with her movement and retired after losing the set 6-3. Pliskova won on an ace that Andreescu didn't move to return.

"I stepped weirdly on a return," Andreescu said after the match. "I heard my knee crack. It kind of went inwards. Putting pressure afterwards on it really bothered me. I could barely bend my knee.

"But I fought with the pain as much as I could. At some point an athlete has to say 'stop' and just listen to their body. That's what I did."

Andreescu said she will get an MRI on Thursday to determine the extent of the injury.

Pliskova said she felt "sorry" for Andreescu, but otherwise offered little sympathy for her opponent.

"I don't know how bad it is," Pliskova said of Andreescu's injury after the match. "I was just ready that she was going to call physio because so far I think she has been calling physio in every match. It was not really a surprise for me."

"Doesn't matter how bad injured she is, how bad she feels, I just wanted to win, get this victory to keep myself in the tournament, which happened, of course not in the best way," Pliskova added.

Andreescu called for coach Sylvain Bruneau after going down 3-2 and told him she was having trouble bending her knee. He told her not to push it. A visibly upset Andreescu said: "I don't want to stop."

The 19-year-old from Mississauga, Ont., is now 0-2 at the season-ending, US$14-million event and can't advance to the semifinals.

Pliskova will advance and play Simona Halep for a semifinal spot. Halep defeated Andreescu in their opening match on Monday.

Andreescu said after the Halep match that she was having trouble with her back, but the pain cleared up after treatment.

Despite the disappointment of an injury-plagued finish, Andreescu's breakout 2019 season — highlighted by a win over Serena Williams in the U.S. Open final — was overwhelmingly positive.

"It's been amazing. I really can't complain," she said. "I made history in Canada. I won my first slam. My game just keeps getting better and better. The thing with me, though, is that I'm never satisfied. Even looking back at that, I still want to do well right now.

"But I have to look at the positives. Hopefully I can recover quick after this. Who knows if I can play. We'll see. If not, then I'm going to have a good pre-season, good off-season, be ready for 2020."

Svitolina, the only competitor in the eight-player field not to win a title this season, last won a tournament at last year's WTA Finals.

The Ukrainian is 2-0 in the Purple Group, winning both of her matches in straight sets. Halep is 1-1.

Svitolina broke Halep in the final game of the first set to take the lead. She then broke the Romanian's serve in the eighth game of the second set and held to win.

The victory was Svitolina's fifth in nine matches against Halep. On the four previous occasions in which she won, Svitolina went on to win the tournament.

This report by The Canadian Press was first published Oct. 30, 2019.