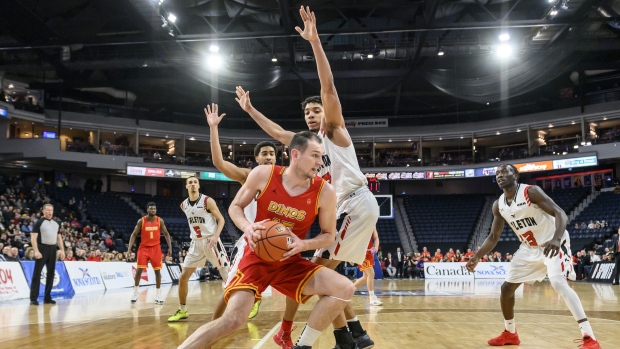 OTTAWA — Here's a look at the four quarterfinal matchups at the U Sports men's basketball championship on Friday:

Calgary got the at-large bid, setting up a rematch of last year's final, won by Carleton ... Ravens look to continue their dynasty with a new coach in Taffe Charles. Carleton has won 14 U Sports titles since 2003 ... Ravens' only loss this season was against Ottawa at same TD Place Arena where national championship will take place ... Dinos have national player of the year in forward Brett Layton.

Tigers' Keevan Veinot became first Dalhousie player to earn Atlantic conference MVP award ... Quarterfinal matchup features only two teams in the tournament without a national title on their resume ... Gee-Gees in as hosts after losing to Carleton in Ontario semis ... Ottawa was ranked as high as third in the country this season.

Thunderbirds aiming for their first national title since 1972 ... UBC coach Kevin Hanson became winningest coach in Canada West history this year when he earned his 314th career victory in early January ... Gaiters finished third in Quebec in regular season before surprising playoff run, capped by a buzzer-beater in the final against UQAM ... Gaiters' Nervens Demosthene scored 39 points against Concordia on Feb. 20, the most in Quebec conference play since 2014.

Golden Bears got All-Canadian forward Brody Clarke back from injury late in season ... Alberta is in the Final 8 for a program record fourth time in a row ... Mustangs led Ontario in three-pointers, averaging 10.5 per game ... Western's lone national title came in 1991.