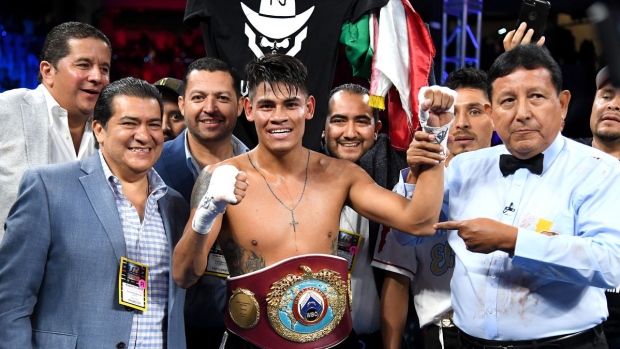 In the co-main event, the undefeated Edgar Berlanga takes on Demond Nicholson in super middleweight action.

You can catch Top Rank Boxing: Navarrete vs. Diaz LIVE on Saturday night at 10pm et/7pm pt on TSN5, the TSN app, streaming on TSN Direct and on TSN.ca.

The 26-year-old Navarrete (32-1-1) is coming off of a unanimous decision victory over Ruben Villa, who was previously undefeated, for the vacant WBO title last October. This marks Navarrete's second run with a title. After defeating Isaac Dogboe for the vacant WBO Junior Featherweight Championship in December 2018, the San Juan Ziltlaltepec, Mexico native successfully defended it on five occasions in a nine-month span and won all of those fights by TKO.

"I am a fighter who likes to face the best, and my challenge now is to beat the tough 'Pitufo' Diaz,” Navarrete said in a press release.

Diaz (26-2), 26, heads into Saturday's bout on the back of back-to-back victories over Jason Sanchez and Adeilson Dos Santos, both by unanimous decision in 10-round fights. Saturday's fight will be Diaz's first shot at gold since falling by unanimous decision by Shakur Stevenson for the IBF Inter-Continental and WBO-NABO Featherweight Championships at Madison Square Garden in 2019.

"I have once again been given an opportunity to become a world champion, but there is something very different this time around. I will not fail," Diaz said in a statement. "I will bring that much-needed world title to Puerto Rico."

The champion will have a significant reach advantage. Navarrete's reach is 72 inches, while Diaz's comes in at 64 inches.

The co-main event will offer a look at one of the hottest fighters in the world right now in Berlanga. The Brooklyn native is undefeated at 16-0 and has won every single one of his fights by first-round knockout or TKO.

Berlanga, 23, last fought in December when he defeated Ulisses Sierra by TKO at 2:41 of the first round.

Over Berlanga's 16 fights, he's only spent a total of 26:33 in the ring, dispatching his opponents with quick ferocity.

A native of Laurel, MD, the 28-year-old Nicholson (23-3-1) comes into the bout in the midst of a five-match winning streak.

In his last time out, Nicholson defeated Mike Guy by split decision in February of 2020.

ALSO ON THE CARD: