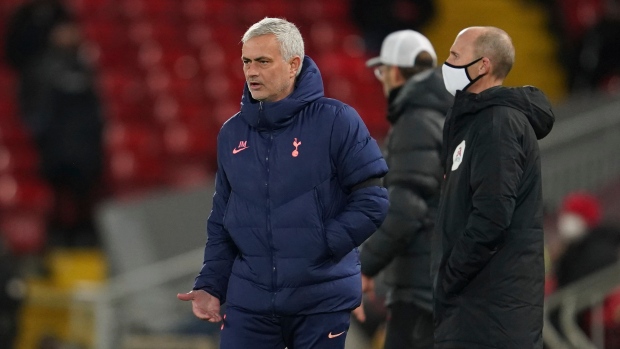 Tottenham Hotspur have lost five of their last six league matches and their chances of finishing in the top four are dwindling, but that's not making manager Jose Mourinho uneasy.

In fact, the three-time Premier League winner welcomes the pressure.

"The problem is if you don't have pressure," Mourinho said at his availability ahead of Spurs' match on Sunday at home to Burnley. "It comes like oxygen, it is our life."

Spurs currently sit ninth in the table, nine points adrift of West Ham for the final Champions League spot. Mourinho says it's for the big challenges like this one that he got into coaching in the first place.

"I don't think there is any coach in the world without objectives or any kind of pressure," Mourinho said. "You just get used to it and also used to the way the press is at the time, you just have to adapt to it."

Following the match with Burnley, it's two straight matches with inter-London competition with a visit to Fulham, followed by a return home to take on Crystal Palace.

Spurs return to Europa League action on March 11 when they take on Dinamo Zagreb in the Round of 16. While Tottenham will be heavily favoured in that tie, Mourinho refuses to overlook the competition.

"When you are in this competition and you get to this stage you don't get easy clubs," Mourinho said. "Croatian football is Croatian football, lots of talent. It's a football country. [It's] not a very difficult flight, not too far, I feel very positive things, but the most important thing is that we get to the quarter-finals."