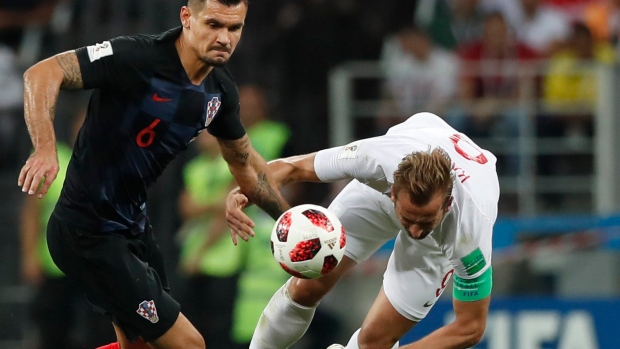 MOSCOW — Harry Kane will likely come home from the World Cup with the Golden Boot as the tournament's top scorer and a burnished reputation as a feared forward.

Had Kane added to his six goals in Russia with either of his back-to-back chances in the first half against Croatia on Wednesday, when England was dominating and led 1-0, he could yet be lifting the trophy on Sunday.

Or the header in stoppage time at the end of 90 minutes when the score was 1-1 and a goal would likely have brought England back to Moscow for the final against France.

Rising high at the back post to meet another precise free kick from Kieran Trippier, Kane misconnected and the ball bounced wide of the goal.

"It's been great to get to this stage but we wanted to keep going. We wanted to win it all," Kane said. "It hurts. I don't know what else to say. It just hurts."

When Kane got his best chances in the 30th minute against Croatia, his first shot was saved by goalkeeper Danijel Subasic. The ball rebounded almost out of play, then sat up for Kane to take another shot from less than two yards at a tight angle. The ball hit the post, ricocheted off Subasic and somehow looped up to safety.

Kane would not get another such opportunity with the ball at his feet. And Croatia would never let England get so close again.

Mario Mandzukic shot past England goalkeeper Jordan Pickford in the 109th minute and Croatia closed out a 2-1 victory to reach its first World Cup final.

It meant another World Cup semifinal heartbreaker for England, only this time the game was under control before it was lost.

In 1990, three years before Kane was born, England also fell short at the semifinal stage — on penalties against West Germany. That team also exceeded expectations and won the adulation of fans at home with a beloved centre forward who played for Tottenham.

History in Turin had its echo in Moscow on Wednesday, and England's scorer 28 years ago, Gary Lineker, was at the Luzhniki Stadium to see it.

At this year's World Cup, teams can pay a heavy price for not getting a second goal to reward itself for a dominating period of play.

England learned that lesson in its opening 2-1 win over Tunisia in Volgograd. An energetic first 30 minutes reaped only a single goal from Kane. The North Africans then levelled with a penalty. The team needed Kane to use his head in stoppage time to get the winner.

"We were really comfortable in the game," said England defender Harry Maguire, who twice rose highest at corners in the first 15 minutes to send headers wide of Croatia's goal. "The only disappointment was that we were 1-0 up, and we should have been more."

Against Croatia, when the late chance came again, Kane could only guide it wide.

"I'm sure we lacked in some areas, there are things we could've done better," Kane said. "We restored some pride back into the shirt, which was an important thing for us to do."

England coach Gareth Southgate praised Kane, who is two goals ahead of Belgium striker Romelu Lukaku for the Golden Boot. Their pursuit will continue in the third-place game on Saturday in St. Petersburg.

"He's captained the team brilliantly," Southgate said of Kane. "I can't ask more of him as a captain or as a man over the last three weeks."