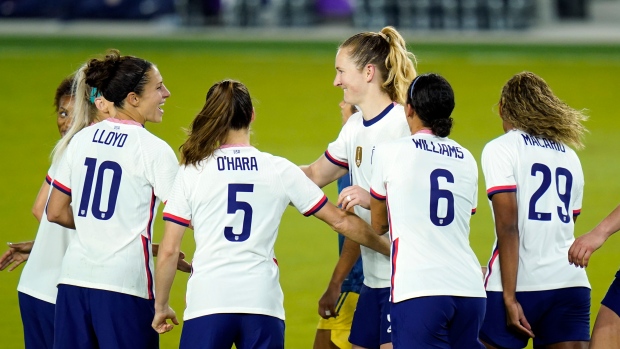 SAN FRANCISCO (AP) — Oral arguments in the appeal by players on the U.S. women’s national soccer team who are seeking equal pay have been scheduled for March.

The 9th U.S. Circuit Court of Appeals said Sunday the hearing will take place at 9:30 a.m. on March 7 in Pasadena, California. Under circuit court procedures, the identities of the three judges on the panel will be released publicly on Feb. 28.

“We hope 2022 will be the year of peace and health — and equal pay. We look forward to these oral arguments,” players spokeswoman Molly Levinson said in a statement.

Players led by Alex Morgan sued the U.S. Soccer Federation in March 2019, contending they have not been paid equitably under their collective bargaining agreement compared with what the men’s team receives under its agreement, which expired in December 2018. The women asked for more than $64 million in damages plus $3 million in interest under the Equal Pay Act and Title VII of the Civil Rights Act of 1964.

U.S. District Judge R. Gary Klausner in Los Angeles granted a summary judgment to the federation on the pay claim in May 2020. The judge ruled the women rejected a pay-to-play structure similar to the one in the men’s agreement with the USSF and accepted greater base salaries and benefits than the men. He allowed their allegation of discriminatory working conditions to go to trial, and the sides reached a settlement on that portion.

The USSF has said the women accepted a labor contract with greater guaranteed pay than the men and additional benefits. The USSF said on Sept. 14 it had offered identical contracts to the men’s and women’s unions, which are separate and have no obligation under federal labor law to agree to similar terms.

The women's union and the USSF agreed this month to extend their labor contract by three months through March.