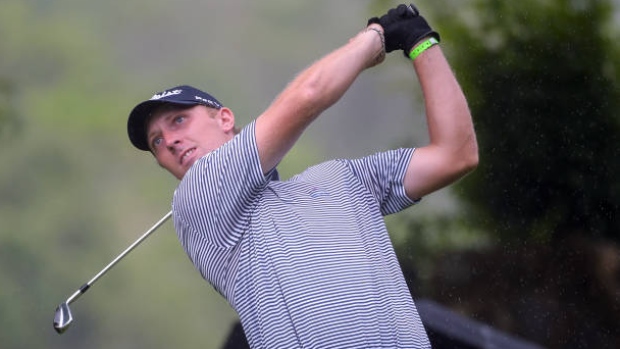 WINDSOR, Ont.— Through 36 holes at Ambassador Golf Club, Eric McCardle is positioned at the top of the leaderboard, opening with rounds of 64 and 65 to take a one-stroke lead into the weekend over Anthony Maccaglia and Jonathan Garrick.

The last man in the field at Mackenzie Tour Q-School this spring in Arizona, McCardle earned status due to closing rounds of 69 and 68 after playing nine PGA TOUR Latinoamérica in 2017, finishing with six made cuts and three top-25 finishes.

Though the start of his Mackenzie Tour journey was shaky, missing the first three cuts of the season, the 29-year old rebounded at the Lethbridge Paradise Canyon Open, breaking par each day, to finish T34.

“Honestly, I was hitting it terribly going into the first few events, even my irons I was hitting bad, and on those two courses you have to hit it straight,” said McCardle. “Fortunately, in Lethbridge I got to start hitting driver, which has been my best club for a while, and I got to take advantage of that.”

Driving back to Las Vegas, Nevada to enjoy the week-long break from the Mackenzie Tour schedule at home, McCardle flew into Windsor this past Monday with renewed confidence in his game and proved it on Thursday, making two eagles to fire an opening 64.

A day later, McCardle once again made two eagles on the same par-5s to play his opening 36 holes 13-under par.

“I just drove the ball well and have been all week, I’ve been finding lots of fairways and hitting my long irons pretty good,” said the 7th-year pro. “Both my eagles were just kick-ins today and conditions have been great.”

With his best career finish in a PGA TOUR sanctioned event T18 at both the BMW Jamaica Classic and Quito Open presented by Diners Club in 2017, McCardle says he’s excited to head into the weekend in contention.

“It’s what we’re all out here for, going into the weekend with a chance to win it,” said the Oak Harbour, Washington native. “I’m looking forward to it, the course is going to dry out and the greens are getting a little bit firmer, it’ll definitely make the course a little bit tougher.”

Heading into the weekend T4, low-Canadian Riley Wheeldon’s 131 total through two rounds is the lowest score of his Mackenzie Tour career as he is primed to compete for his first Canada Life Canadian Player of the Week honour of 2019 and his first Mackenzie Tour victory since The Syncrude Boreal in 2013.