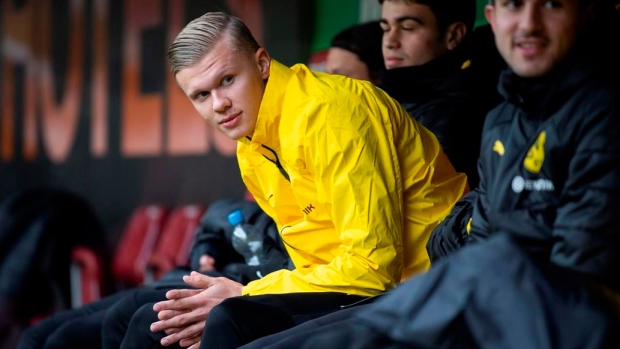 The 19-year-old Norwegian came off the bench to score a hat trick for Borussia Dortmund in his Bundesliga debut last week and could make his first start for the club on Friday against Cologne.

“If he missed a scoring chance in training, he gets annoyed. It's super to coach players like that," Dortmund coach Lucien Favre said of his recently acquired acquisition. “He brings pleasure and that's good for everyone.”

Haaland's exploits at former club Salzburg have shown there is still space for the traditional centre forward, even with strategies and formations changing. Robert Lewandowski is another example. The Bayern Munich striker has scored an almost unbelievable 20 goals in 18 Bundesliga games this season with his combination of power, pace and lethal finishing.

Then there's Timo Werner. His 20 goals have powered Leipzig into the league lead, but he's a different kind of player. Werner's past as a winger is clearly visible in the way he dribbles at defences, and timing his runs to combine with teammates, though he's rarely a threat in the air.

Haaland tends more toward the Lewandowski model and shows no fear of the opposition. So far this season, he has scored 31 goals in 23 games for Salzburg and Dortmund in all competitions.

Most of all, Haaland's brief but explosive Champions League career with Salzburg offers reassurance to Dortmund that his Bundesliga debut wasn't a one-off. Haaland scored a hat trick for Salzburg against Belgian team Genk. He then went on to score five more goals in the group stage, finding the net against both Liverpool and Napoli.

Haaland's exploits in Dortmund's 5-3 win over Augsburg disguised worrying weaknesses at the back. The fourth-place team has stayed in the title race — just about — but has conceded 27 goals, more than any other team in the top seven.

The next opposition is Cologne, which is just above the relegation zone in 13th place but has won its last four Bundesliga games. A 2-0 win over Bayer Leverkusen in December showed it can surprise bigger clubs, and Cologne cracked one of the league's tightest defences in a 3-1 win over Wolfsburg last week.

Werner and Lewandowski will have to wait until Saturday to respond to any more Haaland goals.

Leipzig leads the league by four points and next plays at Frankfurt, which has struggled to build any momentum this season in 11th. Second-place Bayern hosts Schalke later in the day.

Borussia Mönchengladbach is still in third place after becoming a favourite of neutrals with its unexpected title challenge, but was already losing momentum before the winter break and lost at Schalke 2-0 last week.

Both Dortmund and Schalke could overtake Gladbach if they win and Gladbach loses to Mainz on Saturday. Making Gladbach coach Marco Rose's job harder are injuries to defenders Tony Jantschke and Remy Bensebaini, plus a suspension for Stefan Lainer.