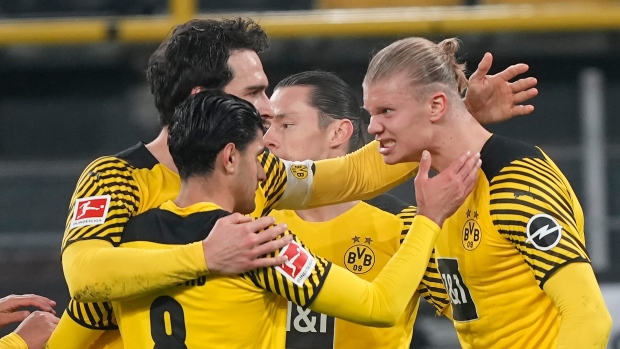 DORTMUND, Germany (AP) — Erling Haaland scored twice to propel Borussia Dortmund to a 5-1 win over Freiburg and close the gap to Bundesliga leader Bayern Munich to three points on Friday.

Belgian right back Thomas Meunier got Dortmund underway with two goals from corners in the opening half-hour as the usually well organized Freiburg seemed lost at a stadium where the club last won 21 years ago.

Haaland made it 3-0 in first half added time when Jude Bellingham caught Lucas Höler dawdling on the ball deep in the Freiburg half and dispossessed him before playing the Norwegian striker in behind the defense for a simple finish.

Freiburg showed signs of life midway through the second half when Ermedin Demirovic reacted fast to bundle the ball in on a rebound, but Haaland shut down any hope of a comeback with his second goal and 15th in 13 league games, placing his shot between the keeper's legs.

That goal was set up by Mahmoud Dahoud, who promptly added a fifth goal with a curling shot into the top right corner.

“The first half was really strong in all phases of the game," coach Marco Rose said, but he was critical of the team for giving Freiburg chances in the second half.

The heavy defeat is a blow to Freiburg's hopes of qualifying for the Champions League for the first time. The team from southwestern Germany came into the game fourth in the table with just 18 goals conceded, the joint-best defensive record in the league along with Bayern.

Bayern can restore its six-point lead with a win at Cologne on Saturday.