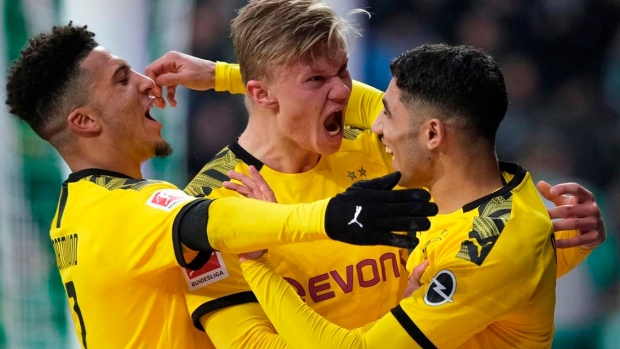 Leipzig stayed a point behind Bayern thanks to goals from Emil Forsberg, Angelino, Marcel Halstenberg, Timo Werner and Marcel Sabitzer. Sabitzer opened the scoring in the first minute due to a mistake from goalkeeper Alexander Nübel, who is joining Bayern next season.

Haalandtook his tally to nine goals in six league games since joining from Salzburg, sealing the win in the 66th for Dortmund to stay four points behind Bayern.

Borussia Mönchengladbach was on course to stay level with Dortmund in the standings until Lucas Ribeiro scoredon his debut in injury time to grab a 1-1 draw for visiting Hoffenheim. Gladbach stayed fourth.

Dortmund had to wait until the 52nd before finding the breakthrough in Bremen. It came from an unlikely source, as defender Dan-Axel Zagadou scored after being set up by Jadon Sancho following a corner.

Haaland almost made it 2-0 minutes later, but Bremen 'keeper Jiri Pavlenka got his foot to the ball.

The19-year-old striker wasn’t to be denied in the 66th, however, when he blasted inside the near post after Achraf Hakimi picked out his run.

Hertha Berlin was routed at home by Cologne 5-0, deepening the sense of crisis at the club in its second game since Jürgen Klinsmann abruptly resigned as coach.

Nothing went the home side’s way as it slumped to its third loss in four games and its heaviest of the season ahead of next weekend’s crunch game against relegation rival Fortuna Düsseldorf.

Düsseldorf boosted its chances of survival by beating Freiburg 2-0 and was six points behind Hertha.

Hertha started ambitiously but forgot about defending, allowing Jhon Cordoba to score on a counterattack in the fourth minute, and again on another counter in the 22nd.

The third goal arrived in slapstick fashion with Cordoba setting up Florian Kainz, whose shot rebounded off Hertha goalkeeper Rune Jarstein and went in off the post. The goal was flagged offside but allowed after a VAR review.

Hertha fans whistled their side off at the break and interim coach Alexander Nouri reacted with two changes for the second half.

“We could have taken off a number of players,” Nouri said.

Hertha played with more intensity but lacked the final precision to score, and was duly caught on a counterattack again in the 62nd when Kainz added Cologne’s fourth.

Mark Uth wrapped up the scoring with a brilliant free kick in the 70th.

“Totally unexpected. We had a good week in training,” Nouri said. “It’s extremely bitter. We have to apologize to the fans.”