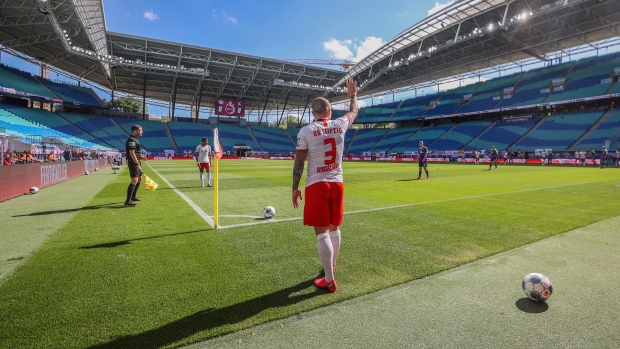 GENEVA — First it was the Faroe Islands. Then came Germany's Bundesliga. Next up is Estonia.

When three soccer games are played Tuesday in Estonia, it will become the third European top-tier league to emerge from a shutdown forced by the coronavirus pandemic.

Games will, inevitably, start in empty stadiums though fans might return as soon as July. Government approval should let up to 1,000 spectators attend each game in the 10-team Meistriliiga from July 1.

“The emotional connection to be back in the stadium is the most important thing,” Estonian soccer federation spokesman Mihkel Uiboleht told The Associated Press on Monday.

Fans got just one sight of their teams on the opening weekend of a March-November season that is normal in colder northern Europe.

“There have been winters when on the 12th of December there was a meter of snow,” Uiboleht said, though temperatures in recent years on that date were above freezing by the Baltic Sea.

The later schedule could be an issue for soccer officials if there is a widely predicted winter wave of COVID-19 infections.

Estonia, a country of around 1.3 million people, had 64 deaths up to Monday, according to the count kept by Johns Hopkins University.

“I can’t say there will be no bankruptcies,” Uiboleht acknowledged, praising UEFA’s early payment of around 68 million euros ($73 million) to be shared across all 55 member nations.

Clubs across Europe, from Barcelona and Liverpool to Flora Tallinn and Nomme Kalju, were entitled to the same rate per player for each squad selection.

Now that Estonia is ready to restart, the federation is also hoping for fresh income from rare overseas interest in league broadcast rights, Uiboleht said.

That form earned the 20-year-old Sorga a move to MLS side DC United.

“It’s not very often that you sell an attacking player from Estonia,” Uiboleht said. “Normally, it would be a defensive player that’s our specialty.”