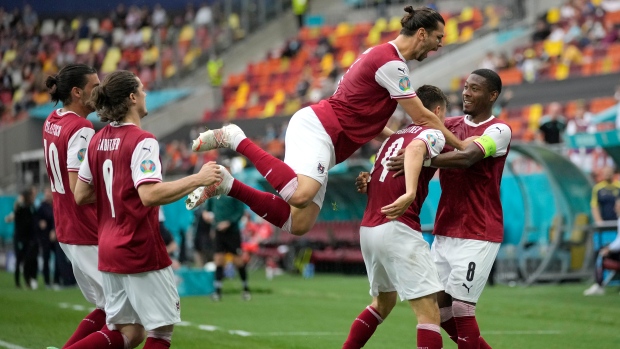 It was job done for Austria in Bucharest, defeating Ukraine 1-0 on Monday to claim second spot in Group C and a date with Italy in the Round of 16 on Saturday.

Ukraine must now wait to see if their three points are enough to finish as one of the four best third-place teams.

The better team for almost the entirety of the 90 minutes, Austria got their precious goal in the 21st from Christoph Baumgartner. The Hoffenheim midfielder poked home off a David Alaba corner to give Austria the goal that takes them to their first ever knockout appearance at a Euro.

Austria would go on to have the better of the chances for the remainder of the match, but neither team could find another goal.

Austria's prize for the victory is a trip to Wembley where they will take on an imperious Azzurri side that won all of its group stage matches and hasn't conceded a goal in its last 10 matches.

Ukraine will sweat out the remainder of the group-stage matches to discover whether or not they will have passage into the final 16.

All Andriy Shevchenko's side needed from this match to secure second spot behind the Netherlands was a draw.