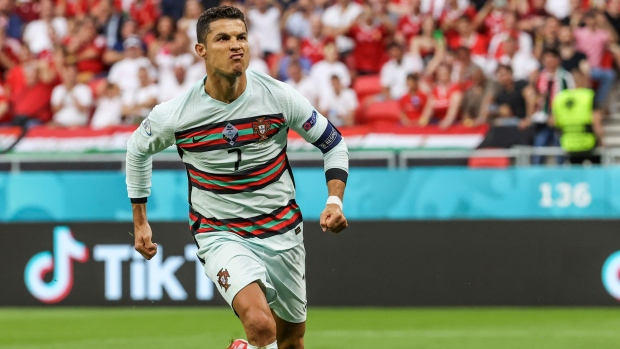 It took 80 minutes, but the defending champions finally broke a resolute underdog.

Portugal got their Euro 2020 campaign underway with a 3-0 win over Hungary in front of a raucous crowd of 60,000 in Budapest to kick off Group F action in a match where the hosts were frustrated Portugal for a vast majority of the match before two goals in three minutes gave Hungary the three points.

With his second-half penalty, Cristiano Ronaldo became the Euro's all-time leading scorer with his 10th goal and later added an 11th.

RB Leipzig goalkeeper Peter Gulacsi was a rock in the Hungary net, making a number of fining stops, including a great save on a dipping effort from 25 yards out by Manchester United's Bruno Fernandes midway through the second half and punching aside a header from Pepe in the early minutes of the second frame.

Portugal had a glorious chance to score just before the half when a Fernandes ball into the area grazed off Diogo Jota before falling to Ronaldo, who failed to poke home.

Hungary sent their fans into a delerium in the 80th. Szabolcs Schon cut inside the area and beat Rui Patricio low, only for the goal to be rightly ruled offside.

Only minutes later, everything fell apart for the hosts.

Portugal broke the deadlock in the 84th when a Raphael Guerreiro strike took a wild deflection and gave Gulacsi no chance.

Two minutes later, Rafa Silva was taken down in the area for a clear penalty that Ronaldo calmly put away to set the new goals record, breaking his tie at nine with France icon Michel Platini.

The Juventus forward added a second and wrapped up the three points in stoppage to give Portugal a 3-0 victory.